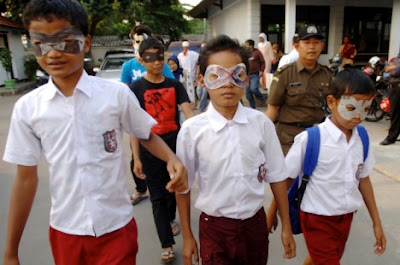 Gambling is illegal in Indonesia. This does not mean it does not happen. There is probably a case to made for instances of gambling and then gambling. The point here is that organized gambling is clearly against the law and any attempt to regulate it into existence has met with fierce opposition. Then there is gambling that kids partake in like having a flutter on the outcome of a coin toss. The first one sees hundreds of millions of Rupiah change hands and the other is lucky if it sees tens of Rupiah change hands.

A recent case that was heard in Tangerang District court has ended with ten children being convicted of gambling. Their punishment to date is that they have been sent home with their parents. The result is clearly not the right one. The case should never have even seen the light of day. But, it did and it highlights the lunacy of the law enforcement system in Indonesia. Anyone who argues that reform is taking hold is kidding themselves.

The lawyer of the children intends to appeal the decision. If I can help out from afar, then I would be more than willing to do so. The idea that these children were ever in detention was outrageous. The fact that they have been convicted is just as outrageous. The Attorney General should have instructed prosecutors to drop the case. The fact that he did not indicates where the priorities lay. I would also suggest that the masks provided hardly are sufficient to conceal the identities of these children, so the Tangerang prosecutors have failed in this regard as well.

There must be something in the water out Tangerang way. These are the prosecutors from the same Tangerang office that placed a young mother of two, Prita Mulyasari, in jail for writing a letter complaining about the service she received from the Omni International Hospital. There must be absolutely no serious crime in Tangerang that these prosecutors have nothing better to spend their time on than jailing young children and mothers.

This is a case that must capture more people's imagination and not just in Indonesia but further afield. An excellent piece, some might call it an enlightened and educated rage against the machine was written by a resident expat in Indonesia, Patrick Guntensperger, and can be found here.

The stupidity of the whole affair is that there are hardened criminals and organized criminal activities continuing to go about their ways without any concern at all about being arrested or brought to justice. Now, whether this is because they have connections to the right people or pay the necessary "fees" to avoid trouble, I will leave to you and your imaginations. However, the lawyer for the ten children, Kristin Tambunan, has a point when she asks, "since when is playing a crime?" This becomes even more absurd when one considers that these children are currently convicted criminals because they were tossing coins to fill in time between shoe shining gigs.

The conviction of these children is, plain and simple, wrong. The appeal must be accepted on the grounds that the judges erred in allowing the case to proceed, as the prevailing laws and regulations clearly state that the prosecution of children is a last resort. The verdict must be vacated and these children need to be allowed to get on with their lives without the noose of convicted felon hanging around their neck.

What is the Office of the Public Prosecutor thinking?
Posted by Rob Baiton at 20:56

I notice they are in school uniform. When caught, I assume it was the school holidays or after school has finished? Or were they not attending school? Even sadder.

Ill have a look at the PG article asap.

Primary school is normal an early morning to midday / mid-afternoon affair. Therefore, it is possible that the shoe shining gig was an after school pursuit. I cannot recall if it was school holidays.

My understanding is that the majority of them are in school and attend.

I don't twitter, so I would not have known that.

I think you summed it up "What were they thinking" and more to the point why have has the boss of this lunacy been sent to sort soiled underwear at a state hospital for the rest of his career.

As for gambling, what a joke..walk around any Golf Course and watch any number of "officials" (always during working hours)gambling away. As for the casinos..is there anyone in Indonesia who does not know where to go?? But hey we got the kids!

Could you please point me to an internet link to Table two (indictable) offences in NSW? Id like to see what is defined in Table 2.

The few times I played golf, I did notice that.

And, I got your drift.

What a waste of resources all round!!! Just so some dipsh*t saved face or met a KPI. Not to mention the impact on the kids.

Always thinking, but generally only about themselves.

Thanks Rob but I can only find Table 2 Indictable offences that are to be dealt with summarily unless prosecutor elects otherwise...

I want the juicy real list. Don't trouble yourself for a newcomer

Thanks Rob. What a wad of information was that last link.

Nevertheless I still remain unconvinced about what is exclusively indictable.

One would think that it was more comprehensive that matters involving the death of a person?? Or matters which attract a penalty of more than 2 years?

a bit clearer now that I am home from work:

Nevertheless from those readings I still remain unconvinced as to what is considered exclusively indictable by the govt of NSW.

One would think there was a more comprehensive defintion than those matters involving the death of a person?? Or matters which attract a penalty of more than 2 years?

I do not really know the context of your search for answers on this point.

So, if you care to elaborate then I will see what I can do to answer the questions you have.

I am often asked what matters go to what court (jurisdiction) It appears that summary/indictable is a bit rubbery. Im looking for matters which must go to the Supremem court of NSW; and also if the same hierarchical jurisdictions apply here in criminal matters - eg Prita in the District court. Why??

Dont worry about NSW supreme court I think I have enough details now.

I am curious as to why Prita's case is in the District Court and not a higher or lower court.

Matters in Indonesian courts generally start in the District Court. Obviously, this would exclude constitutional matters, which go straight to the Constitutional Court.

Legislation matters that are not constitutional are generally heard at the Supreme Court.

Then the myriad of special courts hear matters pursuant to their respective jurisdictions.

Well, I don't actually think this is likely to have effect.