The CIA Did It -- Abu Bakar Ba'asyir Speaks! 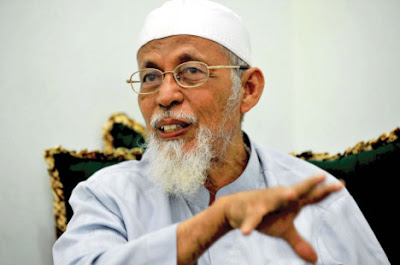 Abu Bakar Ba'asyir is never one for a dull moment. Some might like to describe the man as a radical or fundamentalist Muslim committed to the creation of a pan-Asian Caliphate at just about any cost, including providing support for terrorism. I certainly believe that the man is pro-terror, particularly where people are not prepared to accept what he says or come around to his way of thinking or world view.

However, he is also a bit of a conspiracy theorist it seems, and true to form he has determined that the most recent bombings at the JW Marriott and the Ritz-Carlton hotels in Jakarta were the work of the CIA. This is not the first time that the Head of the Jemaah Ashorut Tauhid, which is a rather loose coalition of Islamic groups keen to see a more universal adoption and implementation of Syariah Law, has blamed the CIA for bombings perpetrated in Indonesia.

In the aftermath of the Bali Bombings in 2002, in which he himself was implicated, he maintained that the bombings were not the work of Islam but of the CIA that was looking to discredit Islam. The claim was that based on the devastation at the Paddy Club in Bali that the bomb was a micro-nuclear device and that it was launched from a US warship off the coast of Bali.

From a religious perspective Ba'asyir condemned the bombings as not being in accordance with Islam. The not in accordance with Islam part relies on the fact that there has been no formal declaration of war. To bomb "targets" without a formal declaration of war contravenes Islamic or Syariah law principles. Further, he goes on to say that the killing of innocent women and children is wrong even if these women and children are kafir.

However, this is moderated by "if they get involved, even in thought, then they must be killed". There does not seem to be any leeway on that front, and the idea that a mere thought is enough to warrant a killing opens the door to many killings as the idea of a thought seems so very discretionary.

If Ba'asyir did not have any followers and his Al-Mukmin Islamic Boarding School did not have such a long track record of breeding willing and able terrorists, the man would be nothing more than a distraction. However, he succeeds on both these points and this makes him a particularly dangerous man. This is sad because he so does not represent the majority of Indonesians or what Indonesia is about. There appears to be little doubt that there are quite a few Indonesians who wish that he stayed in exile in Malaysia.
Posted by Rob Baiton at 11:07

Micro nukes, maybe they should deploy them in Afghanistan or Iraq as they seem to be more effective than current methods. Please

I am sure that I have seen a few things lately in cyber space pointing out that very possibility, or conspiracy theory, about swine flu in the Jewish and Muslim communities.

It is a virus like any other in the sense that it does not stop and take names before it infects. As far as I understand it the virus does not discriminate.

The man, Abu Bakar Ba'asyir, has incredible powers of imagination, don't you think?

Then again, this is from a fella who believes that you cannot kill innocent women and children even if they are kafirs, except if these women and children think bad things about Islam, then it is okay to kill as many of them as you can.

As I said, I am certain that this man does not represent the views, beliefs, and ideals of the majority of Indonesians, and particularly Indonesian Muslims.

The maggot reference on Facebook earlier refers to a previous comment that Mr. ABB made about foreigners being maggots and snakes and other supposedly "undesirable" types of animals.

I am happy to be a maggot, because us maggots are very useful little creatures. Besides if he truly believes in God then why would he believe that God has so much spare time available that he spends it thinking about what useless creature he is going to create next.

[All] Religions are so confusing sometimes :D

What about Stumpie's use of nasty appelations? Why do his readers of his blog generaly give him wide berth?

Thought police are a scary proposition. This is even more so when one considers that ABB might be the chief copper in the thought police unit.

You will need to ask the readers that you suggest give him wide berth.

In an instance where I do not agree with an opinion and feel strongly enough about it, then I will make an argument for the position I believe in.

If readers have a problem with the Stumps "nasty use of appel[l]ations" then they should call him on it.

I honestly cannot answer your question on a wide berth, well other than to speculate...maybe they do not mind / care, or they agree, or they know the Stump and know that he is taking the piss and trying to gee people up.

As I said, I do not know and can only speculate. And, speculation is generally not worth the bucket it comes in.

I realise that there is a difference of scale of audience here - the maggot call carries further than the the scum call. I guess, that at least, warrants a longer honk at ABB

Your best bet is to leave a comment over at the Stump's place and see how that goes.

With respect to the "scum" issue. I would be game enough to hazard a guess that there are plenty of people who would consider the bombers, irrespective of their religion, to be scum.

This is probably even more so when they kill people you know or love.

As I said, the best person to defend the Stump on the Stump's views is the Stump.

You work late. Just caught the TT Prez on Balibo - nice interview with Jimbo. Also saw the Slank "infested" (in the nicest sense) Indonesia United show on Metro tonight. Very impressive given the low budget and short time line to get it together. The Mano sinetron was dreadful - I expect however they will give her more lines in future shows.

I wary of stirring the possum over at the stump.

Have not watched any TV tonight. I have cable so I might catch the Timor Leste President's interview tomorrow.

Indonesia Unite is an interesting phenomena. It will be more interesting to see if it can be worked into a movement that lobbies for and facilitates real change.

It is an excellent use of new media technologies and the use of "older" forms of media to broaden the base. I hope it works.

Slank is into everything, so you are likely to see them and the Slankers everywhere. Been a Slank fan for as long as I can remember. Although, I am a long way from feeling like a Slanker. I once new an Australian fella who had Slank tattooed on his stomach. Now, he was a true Slanker.

I am sure that the Stump would not mind.

Why do his readers of his blog generaly give him wide berth?

If a tree falls in a forest and noone hears it fall does it make a noise?

I am still impressed more comments here about the stump than at home..although confused what to make of it all..