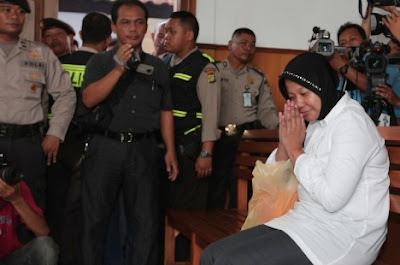 The Prita Mulyasari case is an interesting one. It is interesting for a number of reasons. First, among these, is the necessity for criminal defamation in Indonesia. Second, was this the right case to test the those criminal defamation provisions. Finally, did the Tangerang District Court err in the manner in which it dismissed the indictments which set Prita free?

I noted in an earlier post that the manner in which the indictments were dismissed left the prosecutors no alternative but to appeal. The reason is simple, the judgment sets a bad precedent. The idea that a law does not come into force until all of the subsidiary or implementing legislation is in place is clearly not the case in Indonesia. The judges in this case have erred in the application of the law.

Even more so when one considers that the article under which the indictment was issued does not require any subsidiary legislation to be effective. This really was a case of putting the cart before the horse. Ultimately, this undermines legal certainty rather than reinforcing it.

Funnily enough when confronted with the fact that the Tangerang Office of the Public Prosecutor were going to appeal this to the High Court in their pursuit of a conviction, Prita is alleged to have said the following, "Is it the prosecutors' personal problem?" I wonder!

In my mind, if the prosecutors did not appeal and the judges did not accept the appeal, then I would argue that both had erred in their duties to the larger community. It is unfortunate that Prita is going to end up as a pawn in this struggle. But, the reality is that the judges fell victim to public outcry and their legal reasoning for dismissing the case is not sound.

The judges would have been better to allow Prita's defense team to present their case and then agree with the submissions of the defense and then dismiss the case because the elements of defamation had neither been made out nor had the prosecution presented sufficient evidence in support of the indictment. And, finally, the defenses to the indictment were made out.

If the judges had done this then Prita would be a free woman and not worrying about an appeal.

I have made the arguments for and against the prosecutors pursuing this case in other posts and they do not need repeating here. If our interested follow the link.
Posted by Rob Baiton at 17:14

Your earlier view of the bad precedent of the District certainly seems substantiated.

Your preferred option was the better option but alas it is too late now. If an appeal is granted on the grounds you suggest I guess the defence will make the case they were going to make before, and will win, and justice will be done - a new and hopefully just precedent set. Right?

I don't think you mentioned in previous posts that the matter of subordinate legislation is not relevant to this case.

I still wonder about this point of law. There must be some legal principle(s) that explains if and when subordinate laws becomes valid, in terms of their "dependence on" or relationship to the parent Act, and about when such law becomes the subject of judicial review??

For Gord's sake how does one search your blog?

I was pretty sure that I had.

The primary legislation comes into force as of the date of its promulgation in Indonesia. This means when it is published in the State Gazette.

The subsidiary legislation would then come into force as of the date of its promulgation. This is usually when it is published in the State Reports.

Indonesian laws and regulations always contain in the final articles words to the effect that "this law comes into force as of the date of its promulgation" (Undang-undang ini berlaku sejak tanggal diundangkan / ditetapkan).

In Indonesia any legislation can conceivably be subject to judicial review. The party making the application needs to show that there is conflict between the subsidiary (or subordinate) legislation and legislation higher up the legislation food chain (pursuant to Law No. 10 of 2004 on Legislation Drafting).

At the top of the blog page (left-hand corner as you look at the screen :D) there is a box. Type in the word you want to search then click on "search blog".

I appreciate/value your responses. Thanks. I wonder if you studied Indonesian at school/uni/academy before coming to Indonesia?

I am glad if it helps.

Nope. Never studied Indonesian. My BA (aka Bugger All) was in English and Asian Studies. Although when I did it they were just majors and minors and not something you tacked on after BA in brackets.

The Asian studies component was mainly Southeast Asia, and as such included a chunk on Indonesia. Funnily enough Prof. Adrian Vickers was the bloke that really got me interested in Indonesian studies, or more aptly the study of Indonesia.

That is my post uni life in a nutshell ;)