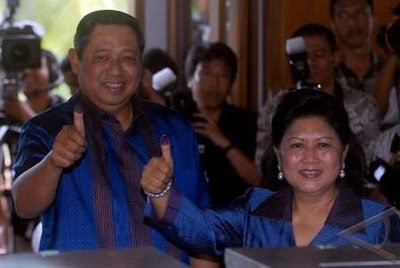 The importance of family and politics in family is something that is firmly and deeply entrenched in Indonesian politics. The debate about whether political parties need to focus more on merit, particularly the promotion of individuals within a party to leadership positions based on their skills and abilities and not their family connections, has reignited with the suggestion that Ani Yudhoyono, the incumbent president's wife, is on the short list for a crack at the top job in 2014.

The truth of the matter is that a great number, not all, political parties are established as personal political vehicles in order to get the person establishing them elected to office. The parties then tend to become, in a very Javanese sort of a way, a personal fiefdom or kingdom run by the families of the person that established them. The family is normally supported by a loyal and trusted inner circle that knows its place and reaps the rewards of being close to the heart of political and economic power.

The commencement of an Ani Yudhoyono campaign at this stage is somewhat crass and way premature. The reality is that the incumbent president, and now president-elect for a second term, has not even been sworn in for his second term yet. This will not happen until late October. Interestingly, the Partai Demokrat (Democrat Party) has not been trying to kill the story, to the contrary the Deputy Head of the Partai Demokrat, Ahmad Mubarok, has offered Anas Urbaningrum as a more likely candidate. The president's spokesman and head of the Partai Demokrat Central Leadership Board, Andi Mallarangeng, has said it is too early to be thinking about these things as the First Lady had too many interests in her charity work and supporting the president to occupy her time at the moment.

However, it is not only the Partai Demokrat that is struggling with succession. The PDI-P, which is Megawati's family political vehicle is confronting a similar problem with succession and not success. The Indonesian Democratic Party for Struggle (PDI-P) is viewed by the relevant members of Megawati's clan as their party, and as such they should be allowed to run it or determine who is to run it.

The simple reality for PDI-P is that Megawati has failed three times at the polls to get herself elected president by the people. Megawati attained the presidency by default when she finally did fulfill what she sees as her birthright. Another simple reality is that there has not yet been anyone in the Soekarno clan besides Soekarno himself that has had the oratory skills to wind up the masses and capture the collective imagination. No matter what you think of Soekarno, there is little doubt that the man had people skills and charisma that has not passed down through his genes.

So, onto succession. Puan Maharani, Megawati's daughter, has gone on the record to say that she is the most likely and the best possible successor to her floundering, politically, mother. However, this is far from a done deal with Megawati's brother, Guruh, suggesting he is a better candidate than Puan. Megawati herself has also gone on the record to say that it is also not a done deal.
Posted by Rob Baiton at 19:43