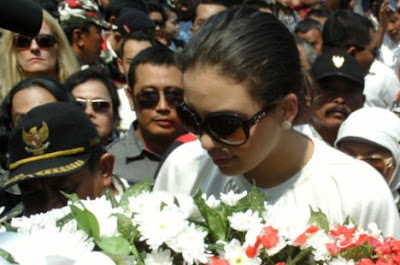 Some have called my fascination with this case an obsession. I would rather call it just a fascination, the fascination about the making of a celebrity, especially where there are interesting legal issues and points of law arising from what are allegedly a tragic set of circumstances relating to domestic violence.

It seems that Manohara's handlers, and presumably chief among these is her mother, will go to any lengths to ensure that the girl does not miss out on a media and photo opportunity. Most of these appearances seem to be geared to exploiting any nationalist sentiment that Indonesians have with respect to being anti-Malaysian. The carefully managed media opportunities are also designed to take the focus off of Daisy Fajarina and her own serious legal problems including the one where she is allegedly on the run from France for the abuse of a domestic servant. Brett over at Spruiked has his own take on the media coveting matter here.

Mano, as she is known to her friends, decided that Monday was a good day to get over to the MMC hospital in South Jakarta and visit some of the victims of the JW Marriott and Ritz-Carlton hotel bombings. Mano did not only make these visits by herself, but she went along with her mother and 50 members of her entourage all clad in red and white camouflage gear. Red and white just happens to be the colours of the Indonesian flag. I am all for a little patriotism and being proud in one's country, but is this really the moment for this expression?

The fact that the prime suspect for planning and coordinating the most recent bombings is Malaysian is not enough reason for this kind of circus to occur, particularly when it seems that the trigger men, or suicide bombers if you prefer, are most likely to be Indonesian. In any event, if Mano was really concerned about the health and welfare of the victims she would not have made them participants in the Mano horse and pony show. This hospital appearance was all about self-promotion and promoting the new soap opera she is to star in, Manohara.

The hospital visit followed a visit to the site of the actual bombings and her signing of the memorial canvas.

It is times like these that people look for sincerity in the actions of their celebrities. Unfortunately, Mano's actions here seem to be self-serving and exploiting the grief of others in order to keep her own name in the press (and by posting this blog entry perhaps I am complicit in this vicious cycle). As serious and severe as the alleged physical and sexual assaults were against Manohara, a double bombing is certainly going to bump you from the front couple of pages of the tabloids and out of the main story slot on all the gossip shows.

Cynical, maybe! But, based on what is available it is a reasonable thing to be.

The case will soon return to the substantive issues that first brought Mano to the attention of the masses. The prince has announced that he is pursuing a defamation action against Manohara and her mother for the lies they have spread about him. The prince went on to say that he is also seeking to terminate the marriage and is hopeful of a divorce in the near future.

Some people will do anything to be famous, and once they are famous they seem willing to do whatever it takes to remain so.
Posted by Rob Baiton at 14:12

I love Mano. If only we could get her soap being aired on SBS, that'd beat my enthusiasm for Masterfchef anyday.

If I had to choose, then it would be Masterchef all the way.

Now, there is a thought. Maybe we should start a letter-writing campaign to SBS in order for them to consider picking up Manohara (the sinetron that is).

Poor Mano (not financially though!).

If you can see the big, fat wreath with big sign of "MANOHARA" written on it and being put in front of the place ... I say no more :D

I write my blog entries generally as a means to rant, rail, rave, and vent on all manner of things. If I humor others into the bargain then this is a bonus.

That said, this Mano thing is moving from the tragic to the downright bizarre.

It would be great to be getting more comments on the Mano series of posts to gauge what others are thinking about the way these events have unfolded to date and continue to unfold.

On a personal level I do not have any problems with her laying a wreath, although the prominence of the name leaves no doubt as to who it is from.

I also have no problem with her going to MMC in a private capacity and offering her support. My beef was that it was so obviously self-serving with the entourage in tow and the media pack following to document her every move.

Anyways, thanks for reading and dropping in with a comment. Comments are always appreciated ;)

i think you are right on this one. Could it be interpreted any other way?? Maybe she's worried about the Prince's suit?

In case you missed it

Geoffrey Rorene, a friend, said Evert worked hard to help youth in their local church. "His heart was open to everyone," he said.

I made a (small) mistake - Evert was a Christian, as I presume, was his forgiving father.

How worried she is about the Prince's defamation action will probably depend on where he files it.

My understanding is that she is not intending to return to Malaysia if it is filed there. And, I do not know if she or her mother has any assets in Malaysia that are worth anything to pay any judgment or order handed down.

I am not sure that the prince is going to file the defamation suit in Indonesia and then make himself available in Indonesia's jurisdiction with a criminal complaint for domestic violence sitting in someone's inbox down at police headquarters in Jakarta.

This comment is probably better in the post where the issue first came up, but no matter.

In the big scheme of things I do not think their religion is important to the forgiveness angle of this tragic story.

Unless, one is trying to distinguish between religions and suggest one is more forgiving or more violent than the other.

I am sure that there will be many statements made to the goodness of those who perished in this senseless act of brutality.

The difference for me in the Evert Mocodompis case is that he was killed the day before his son was born and that is a real tragedy in so many ways.

As I have said before, Victor Mocodompis is an exceptional man to be so forgiving so soon. I think my first / initial reaction would not be one of forgiveness.

In all my life I have never seen such thorough investigation by TV media followed up by close reporting by Detik. TV One are putting everything on this bombing. Giving it everything. They are probably doing as well as the cops.

And I dont think they could really give a shit about Mano's part.

Indonesia Unite movement (On TV this morning and in Unspun).... related to Mano's red and whites??

All in capitals I note. You upset with me or someone. Capitals usually denotes yelling. Besides, I haven't been ignoring you so there is no need to yell your name :D

Onto the serious stuff. Are they doing as well as the coppers? Who knows? Some might suggest they could not do any worse!

There are reports that there was intelligence of the proposed bombings two months or so ago and that it was not considered real as the supposed perpetrators were deemed not to have the capacity or something.

On the not giving two hoots about Mano's part...well, detik is certainly covering it here:

On the Indonesia Unite front. Initially, no (well, at least as far as I understood it at the time). As far as I know Indonesia Unite is a movement in the new media sector that has people adopting a red and white avatar in solidarity with others. Brett over at Spruiked has one I think.

Maybe something has changed in the last 48 hours or so and maybe Manohara now is a part of it.

If I am not mistaken the red and white Mano camouflage brigade grew out of her appearance in front of the Malaysian Embassy during an Ambalat protest the other month.

It would in all reality be another reasonably smart PR move to co-opt Indonesia Unite into the Manohara horse and pony show. Gives her some credibility perhaps (or it might in the minds of her handlers)?

Am I missing something here????
I see no "star" quality here, even her appearance could only be put as "plain". Most starlets are at least easy on the eye. I have seen thousands more attractive ladies/girls here in Village Grande and our parts.
Maybe it is my own personal bias, But I see nothing remotely interesting.

Thinking about it maybe it was a marketing/PR dare by someone. It would have to be a dare as there is no betting here. This could be the only reason surely!!!!!!
GJ

I am not an expert on the modeling scene in this part of the world. However, I would have to agree with you that I struggle to find the reason for her supposed success as a model.

Manohara is very plain to look at. Now, I am no stud muffin myself but I am also not whacking out a press release or looking for a photo opportunity every other week.

I have seen some stunningly beautiful women just going to the mall on a Saturday afternoon with the missus and the kid (when I was resident in that part of the world).

So, I do not really see the model in Manohara.

Interesting idea that this is all just a dare / stunt where the goal is to create a celebrity out of nothing.

Sometimes I feel like I am watching the Truman Show. Everything just seems so stage managed.

Some have called my fascination with this case an obsession

I wouldn't say obsession, but you just like chicks in legal troubles, don't you Rob?
You wrote a lot about Corby, and now this.

A cocktail of 'law and babes' turns you on.

Nail,hit,on the head---- give the man a fluffy doll.

Maybe that is it.

I generally ask, nicely of course, that my anonymous commentators adopt a pen name so that I can distinguish them from other anonymous posters.

Perhaps Keats was on to something.