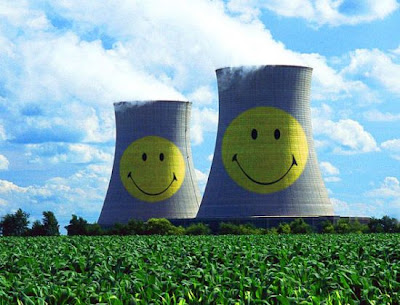 There are many people who question the viability of nuclear power in Indonesia, such as Jakartass. And, there are those that cannot seemingly get enough of it. For this particular post I am not arguing one way or the other but the photo amuses me. I am merely relaying that the government has updated the regulatory framework in this area to reflect the change in value of the Rupiah from when the law was first enacted through to today. It is in that sense an amendment of a pre-krismon figure to that of a post-krismon reality.

The Government has issued Regulation No. 46 of 2009 to increase the maximum liability for a nuclear accident to IDR 4 trillion from the previous maximum level of IDR 900 million. The legal framework for this government regulation is Law No. 10 of 1997 on Nuclear Power. The losses that are subject to compensation payments are those that arise as a result of an accident at a nuclear power facility or as a result of an accident that occurs in the transport of nuclear fuel and materials.

In essence, the government regulation amends Article 34(1) of the Law.

Interestingly, the increase in the maximum liability payments are not indicative of any realization on the part of the government that there are dangers in the use of nuclear power and energy that are costly to rectify in the event of an accident. To the contrary, the maximum liability has been raised to IDR 4 trillion only to reflect the change in the value of the Rupiah against the United States Dollar.

In fact, the regulation would suggest that the Indonesian government is keen to develop a greater nuclear power capacity, as nuclear power is seen as a power that can bring great benefits to the broader Indonesian community.

At least one might be reasonably compensated, if there is such a thing, for their radioactive glow even though the chances are they won't live long enough to spend it.
Posted by Rob Baiton at 20:27