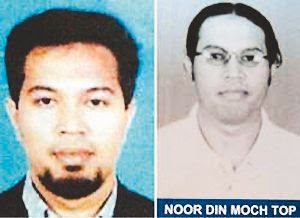 The idea of a terrorism master plan for Indonesia being in existence since at least 2002 and known to anti-terror authorities since 2005 is hardly surprising. The master plan was found on the computer of Azahari bin Husin who was shot dead by police in November of 2005. Azahari and Noordin M. Top worked closely together in the planning and carrying out of terrorist bombings in Indonesia. And, they are both Malaysian.

What is surprising is that it is only being made much more fully public in 2009. Even if one were to give the relevant authorities the benefit of the doubt that parts of this master plan had to be kept secret in the immediate aftermath of its discovery, does not justify it being kept secret through to 2009.

The master plan allegedly shows that the perpetrators of the most recent bombings, who are now being directly linked to Top, are part of this plan. The master plan also suggests that there is more public exposure on an international scale if places that are world-renowned are targeted or the victims are high-profile. High profile in this context notes explicitly that business executives will provide as much, if not more, media coverage for the cause than a couple of tourists.

The suggestion here is clearly that James Castle's business round table was the target of the suicide bomber. The intent being to kill and maim as many of the business people in attendance there as possible. By all accounts the terrorists fulfilled that mission.

Furthermore, the master plan also makes it clear that Bali remains a viable target. The viability of Bali is that it will provide large-scale media exposure. The Bali Bombings of 2002 shows this to be true. Probably scarier still is that the master plan suggests that prime tourist targets include fast food restaurants (such as KFC, McDonalds, among others), taxi queues at airports and other places where tourists congregate in order to travel, art markets (with the art market at Ubud being specifically singled out), open-air restaurants, movie theatres, shopping centers, and the Kuta beach.

This is scary because most people just figured that terrorists would be targeting hotels and nightclubs, or other places of late night entertainment. However, this is clearly not the case if the master plan is to be believed.

My folks go to Bali every year. If anyone asks them about terrorism and do they feel threatened, the answer is always a resounding, no! The rationale or justification for their confidence is that they do not visit bars and pretty much only sleep at the hotel in amongst trips to the beach and some shopping. Their most recent trips to Bali have seen them staying with friends and not in a hotel.

This might no longer be a sensible rationale for those that stay in hotels and go to Bali just to shop and laze around on the beach.

The bombing at the Ritz-Carlton clearly showed that the bombers were targeting the Airlannga restaurant. It is one of the restaurants where guests can have their complimentary included breakfast for staying at the hotel. If the plan is to target breakfast time at major hotels in Bali, then the potential for mass casualties is a real one.

The fact that this master plan exists, and assuming that Australian authorities were aware of it, then the travel advisories issued by the Australian government and other governments were accurate when they stated things such as "intelligence exists that Bali remains a target for terrorists" (or words to that effect).

What this all means? To each their own. I would not hesitate to return to Indonesia, anywhere in Indonesia, Bali included. My philosophy on life has always been, "if your numbers up, then your numbers up!" Nevertheless, that said, it is always important to be aware of your own personal safety and make sure that you do everything you can to ensure that you do not put yourself in harms way.

Yet, when it is all said and done, if we let the terrorists dictate our lives through the use of fear, then we may still have our lives but we do not have our freedom.
Posted by Rob Baiton at 18:37

Rob ....
You are right, if the terrorist' master plan have been publicized earlier people would have been aware of the threat.

Fore-warned is fore-armed. For me it is a simple case of providing as much information as possible and then letting the people themselves make informed decisions about what to do or not do.

I am sure hotels would be against the idea of publicizing that hotel restaurants might be good targets at breakfast time. However, this would only mean visitors would be more likely to opt for room service.

Each of the things apparently noted in the master plan, if publicized would allow people to be more conscious of the threat and allow them to be decision makers about their own safety.

When you receive a travel advisory which says essentially the same thing for a couple of years and during those years nothing of a terrorist nature happens, then you reach a point where you just dismiss the travel advisory as over-cautious government speak.

Nevertheless, it is interesting that the authorities have had it for so long but have ultimately not been able to completely prevent bombings from occurring.

Is there anything that you mentioned that we didn't already know? Perhaps if some of Governors in the regions of the schools, traditional fanatic heartland were put under the hammer to rein in some the larger/higher profile hate merchants via direct schools programs..no cooperation no government cash support.

I am also suprised that the government doesn't make more use of the media to pass a more inclusive message out to the masses counter pointing the myopic ones.

Probably not. Although, I had not heard the theatres, taxi queues. However, when one thinks about it, then it seems reasonable logical if you're a terrorist to be targeting those sorts of things.

Expecting a little much of the government, aren't we? Especially one that seems as comfortable pandering to both sides of the fence on this one.

This will not really work, I suppose this way.