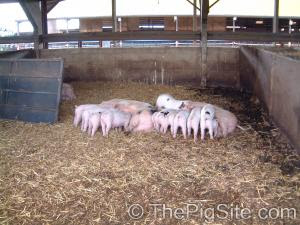 The Bogor government has declared its intention of becoming a halal city. Halal in this case means that there is to be no government services with respect to the slaughtering of pigs (photo). However, if private citizens of Bogor want to slaughter pigs and they have their own tools of the trade, then they are going to be permitted to do so.

I wonder if just by the government stopping the slaughter of pigs is enough to make Bogor a halal city? The last time I was in Bogor there were a few other things that might be considered to be decidedly non-halal, like alcohol and prostitution.

I never went to Bogor for a good feed of pig meat anyways. If I went to Bogor and it was not for work-related reasons, then it was to visit the botanical gardens and the weekend retreat of the President. However, when one considers the huge influx of Jakartans to Bogor on the weekend, then it was usually better to stay in Jakarta and enjoy the relative freedom of movement.
Posted by Rob Baiton at 15:18

You are really true. It reminds me of Malaysia who declared itself as a muslim country. But not so many people know that part of the development was financed using casino profit.

I just thought that there would have to be more to being declared a halal city than stopping the slaughter of pigs.

Halal is not only about not eating pork, but also not drinking alchohol, prostitution, illegal drugs, crimes: corruption, steal, etc.

I made the point about alcohol and prostitution as they are the obvious ones.

The point of the post was not to be a critique of why Bogor should not be categorized as a halal city, but rather to wonder more generally as to what would constitute such a place.