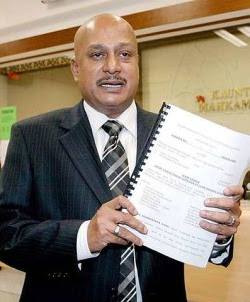 At the outset, a reminder is necessary...this is a fascination and not an obsession! :D

The prince, Tengku Fakhry, has certainly upped the ante in the domestic / marriage dispute between himself and his teenage wife and her mother. The ante in this case is reportedly in the tens of millions of Ringgit for the defamation case that the Fakhry has submitted to the Malaysian courts. Latest reports set the figure at 105 million ringgit. There is also another claim that Manohara's mother, Daisy, owes the prince about 1 million ringgit.

I am still wondering why a 30-year-old prince wanted to marry a 16-year-old wanna be starlet and social climber. Perhaps he was sucked into the black magic powers of the mother and the surgically implanted golden needles and diamonds in Manohara's jaw. Who knows, and I guess in the big scheme of things, who really cares outside of those immediately affected by this ever deepening crisis of domestic bliss turning to domestic mess.

Upping the ante also sees the prince's legal team for the defamation case, headed by Mohd. Haaziq Pillay, seeking special leave from the Kuala Lumpur High Court to file a writ of summons in Jakarta. Generally, in common law legal systems the permission of the court is required where a summons needs to be filed outside the jurisdiction because the defendants are not within the local jurisdiction. There would seem to be no reason why the court would not grant this application, except if the court was of the opinion that the case had no merit and no likelihood of success.

The court has since granted the leave and it would seem now the writ of summons needs to be forwarded to Indonesian authorities and onto the legal team of Manohara and her mother. It will be interesting to see if this spurs both mother and daughter into returning fire and filing criminal complaints in Malaysia regarding the alleged conduct of the prince.

If the duo do return fire then it will require them to start furnishing evidence of the alleged abuse, rape, kidnapping, and torture that the prince allegedly perpetrated against Manohara during their brief marriage. The reports of the abuse and alleged photos of the razor blading of Manohara have surfaced on the internet and doctors have issued statements in support of Manohara's claims. However, this has been a case of the drama being played out in the court of public opinion and the burden in this court is considerably different to that required in a criminal court of law or even in a civil matter.

To be clear, the sense here is not that Manohara has not been abused or raped or kidnapped or tortured in the manner that she claims. However, there is this underlying and emerging series of questions starting to bubble to the surface not only in Malaysia, but also in Indonesia, that if these claims and allegations are true, then why are Manohara and Daisy not more forcefully pursuing justice? On a personal level, I would like to think that in the big scheme of things that Manohara and her mother could use this unsavoury and tragic occurrence to help victims of domestic violence to escape their respective tragic existences for a better future.

Perhaps not one filled with a sinetron named after them and multi-billion rupiah appearance fees and the like, but an escape to a better life.

The defamation case is set for mention in the Malaysian courts on 2 August 2009.

The Indonesian authorities, headed by the Department of Foreign Affairs, has offered to help in any way that they can in terms of assisting Manohara and her mother filing the necessary paperwork to commence legal proceedings in Malaysia. Even the Malaysians themselves have committed to a thorough investigation to ensure that justice is done wherever that justice may be.

No matter what happens, there is still the issue with Daisy being to all intents and purposes on the run from French authorities. The sad part is that Manohara is not implicated in the legal problems that befell her mother in France, yet it is ironic that the mother, who has been so vehement in wanting to see the prince punished for his abuse of her daughter, is in fact a person who has been convicted of assaulting and abusing an Indonesian under her care.

If Indonesia is series about stamping out the practice of foreigners thinking that they can abuse Indonesia's migrant workers with impunity, then this would be a perfect case to say, enough is enough. The Indonesian government should be pro-active in working through the merits of the Daisy Fajarina case, and if necessary facilitating her return to France to face the music. To not do so sends a very poor message to all of Indonesia's migrant workers; where here for you if you want to come back and star in a sinetron and engage in some Malaysia bashing, but while your overseas you're on your own.

The last point is not entirely fair. Indonesia has and continues to pursue initiatives to afford greater protection to their migrant workers. If for no other reason than migrant workers repatriate huge sums of foreign exchange into the Indonesian banking system. Cynical, I know, but also true.

The time has come for Manohara and her mother to decide whether they are going to play legal ball here. The prince has shown his hand, Manohara's move.
Posted by Rob Baiton at 16:08

"At the outset, a reminder is necessary...this is a fascination and not an obsession" you say tomato, I say tomato (Just kidding)

"I am still wondering why a 30-year-old prince wanted to marry a 16-year-old" on this one you need to use your imagination a bit more. What I'm wondering is why a Prince picked a (I'll be kind) plain looking 16 yo.

I suspect that all their attention is focused on the "Sinetron Project" at the moment and no forward planning apart from that has been contemplated.

She does seem to have been somewhat misguided, some mothers can be truly wonderful, HA!!

How about some pics of Will on a Manly ferry, @ the opera house or under the coathanger.

Yes, misguided and energies focused elsewhere. I guess a reported couple of billion rups will do that to a girl.

Is that a request on the photo front?

We get out some. Last time we were down the opera house way it was raining. So, we were focused on getting the little fella under cover. Well, truth be told getting us under cover. He was content in his stroller as it has a great little rain hood to keep him dry and snug.

Maybe this weekend we will head out and take some happy snappies. I did post a couple from down Darling Harbour way.

Some pics would be nice

As much as our Aussie audience likes to see our life here, I find my Indonesian friends are just as keen to see the Aussie lifestyle. Not that i want to turn your Blog into a "mummy's type" but we are always interested in the Boy's progress and his new life.

Sorry back to serious stuff Rob. While you did not state it, I think you imply that the prince would have to come here and Mano go there if charges were laid in their respective jurisdictions.??

Not to complicate matters, but I wonder what happened in the famous Oki case where he (an Indonesian) was tried in jakarta for three murders conducted in USA.

OK, I thought I had, but to be honest I am too lazy to go back and reread the posts to find out. Sad, I know!

Mate, why is it that I always feel like there is some kind of examination underway.

I would have thought the Oki case to be more infamous than famous. The stuff related to this case is way, way, way back in the deep recesses of my brain (and perhaps journal entries that I keep on interesting cases). It is also years and years old.

What do you want? To find out what happened to the man? Or for me to comment on the jurisdiction issues at play?

We will get onto it. Maybe today even. We are all up and at 'em early today :D

No, I Just thought it interesting that a criminal case could be heard in a separte jurisdiction to where the matter occured, and (perhaps) using the laws and procedures of that jurisdiction - I thought this was a no-no. He is also in jail here.

I think there is direct relevance to your Mano article. I am rather hoping some other commentator might help me out. I am not testing you. I am always grateful for your comments (solutions?) however!!

Have a good day.

Rob this is a great post (again). I was wondering whether you would be interested in guest blogging on hakitree or spruiked: jakarta style? I would love to have you write something about Manohara or (my personal favourite) Prita, perhaps a commentary on the Indonesian justice system, your experiences and a comparison to (say) Australia where justice is far from perfect, but is still, um, a bit better... What do you think? A rehash of something you have already written would be fine too.

The reason I am asking you (apart from the obvious -- I love your blog) is that I am building a small Indonesian readership through Twitter, and they are vocal, smart, good, and information hungry. They are the next wave. I'd love to help spread The RAB Experience.

I will not be offended if you say no, so please don't worry about that!

Always up for a challenge.

I can't see why not. But, it will probably be the weekend. Any length restrictions?

Absolutely no restrictions. We could always post as a serial if that worked. Completely up to you. Thanks!!! I am honoured!

This can't succeed as a matter of fact, that is exactly what I believe.