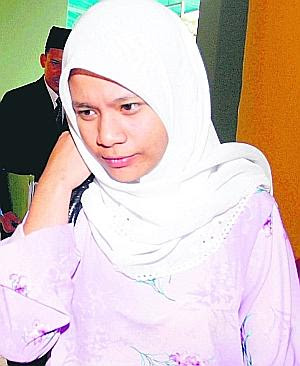 Drinking beer and being a Muslim in Malaysia do not mix. However, when they do, you might just find yourself in a situation where you are before a Religious Court and destined for a few strokes of the cane.

The Religious Court in the Eastern State of Pahang has sentenced a Singaporean model of Muslim faith to six strokes of the cane for drinking beer in a nightclub, and getting caught doing it.

I remember getting six strokes of the cane in high school back in the day when a little bit of corporal punishment was thought to be good for naughty boys to ensure that they grew up into responsible adults. However, my understanding is that Malaysia is similar to Singapore in that you get the rotan cane across the buttocks. I dare say that it probably hurts a little more downstairs than on the hands.

The model, Kartika Sari Dewi Shukarno, pleaded guilty. Generally, early guilty pleas attract a little bit of leniency. However, this was not to be. The court held that a good old-fashioned caning was in order, if for no other reason than the law allows for such a sentence to be imposed. But, furthermore, the court believed that this case would serve as a good example not only to Shukarno, but also to other Muslims thinking about having a beer or two. Shukarno also was fined 5000 Ringgit.

Shukarno is intending to appeal. Yet, there does not seem to be good prospects for success in light of the court's reasoning. I suppose her lawyers might want to be arguing that the sentence is manifestly excessive for the nature and seriousness of the crime.

I wonder is this fair and just, or is it just a simple case of; this is the way it is, get over it, and deal with it.

Pretty much impossible to have anything other than contempt for the whole shebang. Question is why bother, perhaps time to turn our backs on the whole ignorant, backward, myopic lot of them..Call us when you are ready to join the 20th century and humanity.

I would have figured that Malaysia had more pressing problems than caning Singaporean models who get caught drinking beer.

Aww bugger..you got me..
Anyway even 20th would be a several century leap for these retards.

But you are right like a lot of places in the general vicinity..just a matter of time before they implode..key is picking the right time to leave..

And here is me thinking that your "divine GPS" was switched off when you left your own country. Seems to happen with my Muslim friends when they travel.
She should consider herself lucky as I remember being caned without the luxury of a few beers first.
Next time luv take my advice, ditch the headgear and grab a gold cross necklace, it'll be better than a force field.

The key is indeed picking the right time to pull up stumps. However, that said, if a really good opportunity was to come up, then we would certainly think about a return to the land of kopi tubruk!

I am sure that she is wishing she had the opportunity to read your words of wisdom before going to Malaysia, drinking beer, and getting caught :D

I will have to check the Australian travel advisory for Malaysia and see if it says anything about caning for beer drinking...

On one side, as the saying goes "when in Rome... etc"
Indonesia has similar deal in Aceh.
If the people there like it, who are we to judge? We don't live there.

The problem is if the majority actually don't like being repressed by such law, but a select few who think they are "holier than thou" impose it by force.
This, I have a problem with.

I myself disagree to mix state and religion.
My reason is simple:
The last time I paid my taxes, nobody asked my what religion I believe in. Why should my tax money be spent based on one?

The problem is if the majority actually don't like being repressed by such law, but a select few who think they are "holier than thou" impose it by force.

Trouble is, it is by force or intimidation, take Indonesia every free vote has indicated a strong preference for secular law (including Aceh)and yet the fundies run amok imposing thier sad little myopic view on others.

I noticed you have left a few comments today. It is nice to know that I have written something that has piqued your interest.

By the way, do you know if I can get your book in this part of the world?

Yes, on the Rome and Roman front.

I am not saying that it should not happen if that is what the people want. What I am saying is that the system is two-tiered and in my mind this makes it inherently unjust.

For my mind this makes it all too problematic. That is just me of course :D

Interesting point on taxes and religion. What about if one was required under the laws of the country to pay a tax as a Dhimmi?

I am checking it out. Juggling too many things in my head. I remember there being an RUU on religious courts that would have broadened the jurisdiction of the religious courts. I thought this had passed or a perpres or permen was issued to that effect.

Yes, the religious courts are of limited jurisdiction and focus on family law related issues. Nevertheless, there has been a fairly vigorous attempt to allow the court to deal with Islamic finance issues as well.

If I have erred I will make a correction so that it is clear.

If people want to live in a system where non-Muslims and Muslims are treated differently in the eyes of the law, then Ben has a point; it is not for me to judge.

That does not forbid me from commenting on it though ;)

thanks for the mentions of Dhimmi and wakaf - makes for a better type of reading than the lickspittle article of you know who.

I don't know to whom you refer.

Not trying to be high brow around this neck of the woods, rather just delving into the issues.

Besides, Harry had a point about what the jurisdiction of the religious courts is limited to. I am just reading through my stuff on the latest bill in this area and getting back up to speed.

The Dhimmi issue is an interesting one.

Sorry check out the (black) stump... he is asking for trouble, isn't he?

I had never heard of those two terms - yes, very interesting. Im running them by my resident Kiai right now (in the office)

Even if I was inclined to defend the Stump in terms of having the right to express an opinion, even where I disagree with that opinion, I won't.

I am sure the Stump is more than capable of defending himself and his views. At least this is my assessment of the man from his to and fro over at IM.

Good luck with the explanations from your local or resident Kiai.

Although confused twas the stump just threatened (again) or twas it just an observation...if so intriguing that the post on a Sand Groper pollie raise the ire and why comment here?

mmmm...Its ok Rob..you are the high brow.. as some would say stumps rants an raves are mono-brow

No, it's not on the buttocks. The religious court Syariah canings are completely different from, and vastly less serious than, the judicial canings meted out (to men only) by the criminal courts in Malaysia. If it's a woman she sits down on a bench and is lightly caned on the back.

I should have figured as much having watched a few canings in Aceh. Those canings have struck me, and plenty of other people, as symbolic as much as anything else, but then again I am not up there getting whacked.

Once again, thanks for pointing that out.

This is enough to drive to to drink! What IS happenning to my country?!

Having said that, the religious authorities will only bother those who are without friends in high places or appeared not to be well-heeled.

I should know. I can buy and have bought lovely cocktails in five star hotels and resorts and restaurants in Penang and Kuala Lumpur without anyone asking if I were a Muslim, or well-heeled or have friends in high places (no to the last two)

So, please do not think too badly of my country. We are more than these religious zealots.

I find it interesting that religious courts are going this way.

I do not think badly of Malaysia.

The judge and the enforcement officers are just doing what Allah S.W.T has given as guideline. To send clear message that Islam prohibits drinking.

For other religions followers to interupt in the commencement of Islamic law in Islamic Society is TOO MUCH.

Islam prohibits the followers not to drink based on the:-

a) stated in the Al-Quran the holly verse from Allah.

b) Drinking will only destroy a person and society as a whole. It has being proven that the drinking habits will only lead to other bad things like fornification, killings,rapings,accidents (where the innocent wud also involved and get killed), domestic violance where their wives and chidren got kick and slap for no reasons etc etc..since the drunk will totally lost control of his brain. Most of the time the drunk will act like an animals sorry to say.

So ..thats why Islam prohibit drinking any form of alcoholic drink.

If the enforcer canned the non muslim for drinking then you got a point to protest.

Learn and understand Islam before condemning.

The original post is not condemning Islam for prohibiting drinking. Although, I once recall someone trying to explain to me that it was not as cut and dried as some make it out to be, the prohibition that is.

The original post questions a number of things, such as: the need for the caning, the two-tiered legal system, and the value of the punishment as a deterrent, among others.

But, thanks for dropping by and leaving a comment. Comments are always appreciated.