SBY for Secretary General of The United Nations? 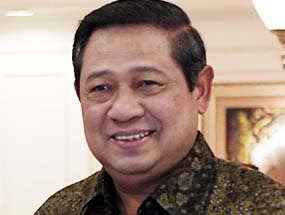 Partai Demokrat (Democrat Party), the political vehicle of Susilo Bambang Yudhoyono, is so buoyed by its recent success in the parliamentary and presidential elections that there is already talk that SBY, as the president is affectionately known, is a serious contender for the position of Secretary General of The United Nations.

The Deputy Head of the Partai Demokrat, Ahmad Mubarok, has been unequivocal in stating that considering the Indonesian Constitution and subsequent electoral laws prohibit SBY from running for a third presidential term, the president is going to take the SBY show on the road and go international, so to speak. It would seem that SBY and the Partai Demokrat have already lined up SBY's next position at The United Nations.

To say that this all seems a little premature is understatement in the extreme. However, what this does say is that SBY appears likely to abandon most of his domestic responsibilities to the Vice President-elect, Boediono, and the next cabinet as he seeks to expand and develop an international profile that is necessary for any serious lobbying for the Secretary General position.

The idea that SBY is a good shot at the Secretary General slot at the UN fails to acknowledge that the man's domestic political record is average at best, and he still has a whole term to serve as president of the Republic of Indonesia where the potential for things to go pear-shaped still exists. The idea of SBY being the Secretary General of The United Nations is also going to ensure that the spotlight is fixed firmly on not only his post-military record but his military record as well. Any skeletons that are in that closet are sure to be exposed.

The point though is not whether SBY is a legitimate shot at succeeding in a bid to be the Secretary General of The United Nations, but rather whether this is the point in time to be talking up the prospect.

Some people are just too Euphoric!

And, an exceptional gift for imagination.

I guess stranger things have happened, although, at this moment in time, I am not sure what of the top of my head.

Unfortunately this may be rather impossible.
Asians got their turn with Ban Ki Moon, so the next one will not come from Asia.
When the round robin returns to Asia, SBY will be too old (or too forgotten).

Yes Rob, it is not a democracy. They do take turns there at the UN.

Yes, that would be one reason.