The Faces of Terror... 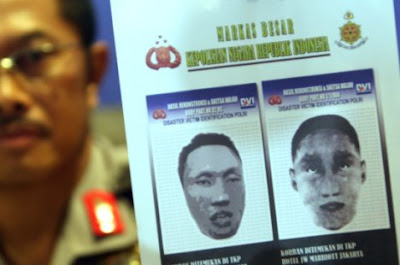 The sketches are of the reconstructed faces of the alleged bombers. Both their heads were found at the scene of the crime. The sketches have been released in an effort to get members of the public who recognize the two faces to come forward and identify them.

Initially, authorities were leaning towards two men identified as Nur Hasbi and Ibrahim. However, it is being reported that the DNA tests on family members related to Hasbi and Ibrahim do not match the DNA of the alleged bombers.

The additional data accompanying the two sketches state that the Ritz-Carlton bomber was approximately 40-years-old, 165cm tall, with dark skin and black hair. The JW Marriott bomber is approximately 17-years-old (so very young), about 180cm tall, with light skin. The forensic teams must have also found a foot as it is noted that the Marriott bomber wears a size 42 shoe.

Identifying these two individuals is going to be important in determining whether or not the links alleged by SBY in his post-bombing speech that the attacks were coordinated attacks against him in response to his election victory and an attempt to undermine the economy can be made out. It will also be important in determining what the motivation for such wanton violence was. And, finally, it will bring closure to their loved ones.

Although some might not care much for the last point. However, the reality is that they were likely to be someone's husband, father, son, brother, uncle, or whatever, so there is probably someone, somewhere who loves them and misses them.

It seems that the police have allegedly captured and detained the wife of Noordin M. Top. I am not sure that this ups the ante on Top but if the police can get a head start on his next move then they might just be able to catch him. It appears that Malaysian police and their Indonesian counterparts are working closely in trying to break down what is an international operation under the guidance of Noordin M Top.

Violence is not the answer. And, for this reason, the terrorists will never win!
Posted by Rob Baiton at 17:23

No, terrorists and, by association and ethos, nor will the extremists (look at the backlash in Iran). However, the sad fact is that a relatively small number of twisted people are able to bring misery to millions around the world - all in the name of their particular "ism".

Agreed. My point was not that small groups of radical, fanatical, or otherwise could not inflict serious misery on the masses.

My point is just the eternal optimism (an "ism" :D) that these particular groups and individuals will ultimately not win.