Children and the Justice System in Indonesia 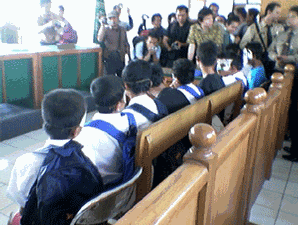 Despite the title of this post, it is not some academic expose on juvenile justice. It is a commentary on a particular case that is currently before the Tangerang District Court in Indonesia. It involves children and an alleged gambling session.

The relevant law in Indonesia is Law No. 3 of 1997 on Juvenile Justice. The law states that a juvenile that is subject to the provisions of the law is any child between the ages of eight and eighteen. However, where children are found to have committed an offense that is subject to the provisions of this law and they are under the age of eight, then the child may still be subject to some form of action. This action will not include a court appearance. However, it might include removal from the home and placement with child services.

However, once the child has reached an age of eight then they can be brought before a court of law and tried for their alleged offenses. The trial is to be closed and the identities of the children are to be protected. Interestingly, the above photo is from the hearing and it shows the children wearing masks in order to protect their identity. For me, though, a closed hearing must mean just that, it is closed to all bar the prosecution; the defense counsel, the judges and associated court staff, and the child or children's immediate families. This is seemingly not the way it has been done to date in this case.

However, the lack of real protection of the children's identities is hardly surprising. Having lived in Indonesia and watched a good deal of crime reporting on television or reading about crime in the paper, it is clear that a very poor job is done with respect to "really" protecting the identities of children in criminal matters. I am certainly not in favor of naming and shaming of minor children. On a slightly different note, I also believe that children who have been victim of crime have an absolute right to have their identities protected.

In a case that is currently before the Tangerang District Court that involves the prosecution of ten children ranging in ages from eight to eleven. These children were allegedly caught gambling. Their game of choice was guessing the value of a coin at IDR 1000 a game. This is hardly big stakes gambling, and you would think that the police, public prosecutors, and the courts have bigger fish to fry in the crime stakes than these ten children. Then again, maybe not.

The children were caught in the middle of their high-stakes game within the surrounds of the Soekarno-Hatta International Airport in June. Sadly, the reason they were there was because they were trying to make a few extra Rupiah shining shoes of much wealthier travellers on their way out of Jakarta or out of the country. The majority of these kids are regulars in primary school and would hardly classify as hardened criminals in the making.

In any event, the criminal prosecution of these children should have been a case of last resort. A slap on the wrist and a warning to their parents and guardians that this sort of thing is not on and if they get caught again then perhaps it is time for social or children's services to become involved. The idea that these ten children could end up in a juvenile detention facility for gambling less than one dollar is more wrong that the offense that they have allegedly committed.
Posted by Rob Baiton at 19:27

This story gives new meaning to nipping a problem in the bud!
Perhaps the police were not getting their cut of this extremely lucrative shoe shine business and hence the crackdown.

The press should have been much more aggressive in this case. The tanggering court, the attorny generals office, the arresting officers all need to appear on the front pages as examples of duncery at its finest.

btw I found a most excellent rant here http://pagun-view.blogspot.com/2009/07/baby-criminals.html#comments

I read the post that you linked in here. PG is certainly good for a good rant.

I was consciously trying to avoid the rant on this one and focus on the silliness of the law but also the misapplication of it even in its current form.

A mainstream "free press" does not always take up the challenge of questioning the authorities that be.

So, I guess this is where bloggers come in and hopefully a few good rants like PG's will inspire some mainstream media attention.