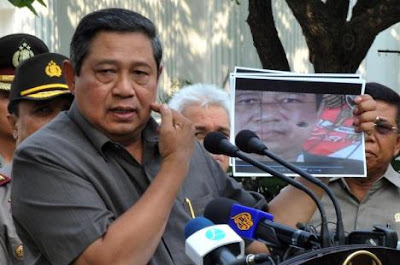 Susilo Bambang Yudhoyono, or SBY as he is affectionately known, seems to have erred in his speech in the immediate aftermath of the bombings of the JW Marriott and Ritz-Carlton hotels last Friday. The president used the opportunity to link the bombings to the recent presidential elections and then to link his political rivals to the bombings and other yet to occur violence at the Headquarters of the General Election Commission (Komisi Pemilihan Umum / KPU).

It is now being argued whether the speech is to become an ongoing political problem for the incumbent president as he heads into a likely second term (the official election results have not yet been released) or is it nothing more than a storm in a tea cup that will dissipate as quickly as it formed.

Yet, there are plenty of people coming forward suggesting that these are the same photos that were shown to the House of Representatives (DPR) in 2004 by the National Intelligence Agency (Badan Intelijen Negara / BIN). Permadi and Andreas Pereira of PDI-P have said that they saw these pictures in 2004. Sidney Jones of the International Crisis Group also believes that the photos originated in 2004 and were taken at a facility in West Seram in Maluku.

If it is true that these photos are from 2004 then there are two distinct possibilities; the president has been misled by his closest security advisers or SBY was being a little disingenuous by using these photos to link the attacks to himself and the recent elections.

However, the president is not conceding that he erred in his judgment in making the statements that he made. To the contrary, SBY has gone on the offensive to state that his comments have been misinterpreted as the speech did not link the hotel bombings to the elections and presumably he did not all but name Prabowo as being involved.

I must add here that I am not a fan of Prabowo. The evidence put forward to date that he was involved in the disappearance and presumed murder of activists in 1998 is compelling and deserves to be heard in a court of law. The idea that the let bygones be bygones, and that this is all ancient history and Indonesia is ready to move on, neglects to understand the loss suffered by the family and friends of those who were disappeared. My argument has always been that the timing of SBY in calling out Prabowo, and suggesting that Prabowo's time was near in terms of him being held accountable for his past sins, in this particular speech and at this particular moment was poor. I am all for the heat being turned up on Prabowo.

The president claims that the photos are from 2009 and the intelligence is real, and not some rumour, gossip, or beat-up for the press as being perpetuated by those not in the know.

The debate as it develops is interesting as there are two distinct camps evolving; those that think the president erred in the manner in which he went about this business and those who do not give the proverbial, rat's arse, and who cannot see what the fuss is about. In the former camp is Professor Effendy Ghazali. Ghazali is adamant that SBY has made a "significant mistake". The reality is a little more simple than that, the president might have erred in his judgment on this one but it is far from likely that this error is going to be fatal to his next term in office.

If the photos are definitively proven to be from 2004 and not from May 2009 then this story might get a new set of legs.

Watch this space.
Posted by Rob Baiton at 09:13

Hmmm... He didn't mention his opponents at all in the speech and I didn't pick up any implied reference. can you expand?

The big question: to what end? What does SBY have to gain from this?

To be honest, I don't think anyone here actually cares.

I did expand in the post I made about SBY's speech. But, I will cut and paste some of the relevant parts here.

"The bombing was committed when people were still concerned with political brouhaha at the elite level, also — as I have been noticing everyday — with provocative remarks that maintain heated and hostile circumstances, which is not the aspiration of the people who fulfilled their political duties a few weeks ago. [Seems to be a dig at Prabowo. Prabowo has been vocal in his public criticisms of the electoral process, particularly the quick counts. This part of the speech says to the other two campaigns that it is time to suck it up and admit that you lost, the people have spoken and spoken decisively, they do not want you, they want me. So, be good sports and good losers and go home!]"

"To the Indonesian Police Force, Indonesian Armed Forces and National Intelligence Agency, also the governors, district chiefs and mayors, I would like to ask you to remain on high-alert status and strive to prevent terrorism. More importantly, the law enforcers must truly seek, capture and prosecute the perpetrators, organizers, and masterminds behind this violence. Maybe some of them have committed crimes, assassination or murders and gotten away with these crimes, but this time we will not let them become Draculas and death-mongers in our country. [So, why did the State let these "Draculas" get away with crimes in the past and what has changed now?]"

I have always said in each of my posts that he did not name his opponents directly. He was careful not to. However, the references leave little doubt to the intention and the implication.

The big question. There are a few things that SBY might have considered as "gains" for him.

1. marginalizing his opponents with a view to making them even less effective as opposition in the new parliament;
2. gain some sympathy from the public that he is under personal attack and that he will have to make some tough decisions in the future to guarantee the people's future;

Do people really care "here". I guess it depends on who and what you read. I have read a few things and talked to a few people who care about what was said and its timing.

I appreciate that in your circle of friends and colleagues that this is a non-starter / non-issue. I would also agree that for a lot of people it is probably not an issue at all. But, Some people do care and are concerned (I point some of them out in the post).

I saw really much worthwhile data above!