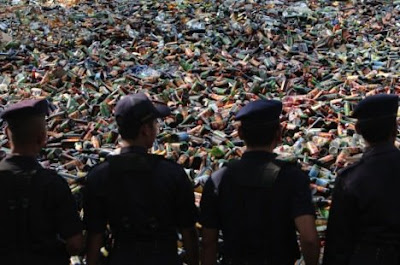 Indonesia is the world's sixth largest importer of alcohol. This is pretty impressive for a country that despite its claims of being a moderate secular society still frowns on alcohol consumption.

In light of the fact of the potential for growth in the alcoholic beverages market in Indonesia were the government to free up controls on both local and foreign investment in the sector, the likelihood of this happening seems remote, actually very remote.

Investment in the alcohol sector is strictly regulated. In fact, investment in this sector is "closed "according to the negative investment list. Closed simply means that there is to be no investment into the sector because it is a sector that is deemed to be detrimental to the development and harmony of the Indonesian community.

Yet, considering the amount of alcohol imported, there would seem to be some good arguments for allowing the development of the sector so that the amount of imported alcohol could be reduced over time and replaced by locally produced alcohol.

The Indonesian Chamber of Commerce and Industry (Kadin) is advocating and lobbying for the government to lift the restrictions on investment. This is not going to be successful! There is no political expediency in the move for the government and there is nothing to be gained by the government entertaining the move. However, it is worth noting that investment in the sector would undoubtedly create jobs for Indonesians. Whether or not this balances out the perceived social ills that alcohol brings is a matter for further debate, so it seems.

In the meantime Indonesians and visitors alike will get to watch the destruction of much of the illegal alcohol that finds its way into the Republic like in the photo above.
Posted by Rob Baiton at 00:31

What would be the benefits? Surely local production would only increase consumption? If you look at our respective countries, alcohol is a serious problem. I wouldn't inflict it on anyone.

My take on the benefits is that the argument is a substitution one. That is, if some of the alcohol that is currently imported is produced locally then this must be something that contributes to the Indonesian economy/

This contribution is two-fold, more investment and more jobs.

I do not see the argue as being one about consumption. This could be "handled" by maintaining existing quotas.

For example, if the current import level is one million bottles, then the government could cut this to 750,000 and allow investment into the alcohol producing industry that would allow production capacity to rise only 250,000 bottles.

A scenario like this gets over the increase consumption argument.

Agreed. Alcohol abuse is a serious problem in Australia (I am not a big follower of NZ news, sorry mate! So, I will take your word for alcohol being a problem in your neck of the woods :D)

I was not suggesting that the government allow a "flood" of investment into the alcohol industry to increase production capacity in order that this might drive consumption.

I was suggesting that perhaps an opportunity existed to permit increased investment in the sector by removing it from the negative investment list and then, as noted above, if the government was so inclined or felt it needed to appease certain elements of the community it could cap capacity at current quota levels.

It was merely a thought (out loud).

All quiet in town. I note some last minute swing away from SBY - can you guess why?

are you really suggesting that Indonesia overnight might be able to produce quality alcohol?? Starting with Brem in Bali, and Tuak in the East...??

how are they going to guarantee its free of methanol??

Like a saying said: "If you won't do it, just do it, but don't force others to do the same".

I am glad to hear that it is all quiet and the election is seemingly running smoothly.

Do tell, why the swing away from SBY?

I have been reading that the quick count and exit polls are suggesting that this is going to be a one hit wonder (in the sense of there is not going to be a need for a run-off).

I am not suggesting that Indonesia can produce quality alcohol overnight. Nevertheless, some of the investment points are valid, as are the motivations for wanting to reduce imports.

There are inherent social ills that come with the irresponsible use of alcohol (abuse), which I think is Brett's point.

I was merely thinking out lid about how the government could conceivable justify an opening of the industry to investment.

How can the government guarantee that the locally produced alcohol is free of methanol and other deadly additions? The same way as most other governments of the world do, enforcement of a strict code of quality standards.

Furthermore, it would be in the best interests of investors in the sector to ensure that there was suitable quality being produced. Simply, if there was only poor quality alcohol being produced then your bottom line is going to look increasingly ugly over time.

I appreciate that there are criticisms of Indonesia's ability with respect to enforcement of laws, regulations, and the like.

Nevertheless, the points being made here were with respect to investment and not quality.

I am not talking about forcing anyone to do anything against their will or the like.

The post really was not even a commentary on the social ills that alcohol gives rise to.

The NSW government has just upped the ante on pubs and clubs in NSW with a history of alcohol related violence. Some of the new rules require, for example, no glassware after 12am; lock-outs from 2am, restricted service (a 10 minute no service period every hour after 12am), and constant assessment and review with the possibility of loss of trading licenses.

So, once again, I am not advocating the drinking of alcohol or an increase in consumption, rather the post was about if alcohol was being imported anyway to the Republic and this quota level was going to be maintained, then isn't there an opportunity for Indonesia to reduce its reliance on imports of alcohol and produce some of this volume of alcohol locally.

The swing in my neck of the woods but not in others obviously, see Jakartass, was due to the "debacle" about his spokesmen (the Mal-larang gang of four) fobbing off the American version of Indonesia Raya a no big deal. I think

anon is anong here. sorry. No relation of course.

Just looking at some of the quick count figures now. Most of the survey groups have SBY/Boediono running at more than 60% of the total vote.

However, the final say on a run-off is with the final KPU count. And, perhaps the courts for any challenges that the other two pairs make with respect to any voter "disenfranchisement" suffered by their supporters.

Rob,
Could dramatically cut the imports, especially for wine and bubbles if FG was to return home.

Don't show her this comment...please!!!

Having a think about it, I am thinking that Kadin was more focused on the beer and spirits rather than the wine and bubbles.

I am not sure that vineyards in the tropics would work. Then again whoever thought that Ice Wine would be a goer is making a killing at the cash register.

They do produce wine in Bali, and although not the best quality I have ever tasted it certainly aint the worst swill around. It is our poison of choice at a certain Italian place we frequent, 180,000 for a litre puts us firmly in the "cheapscate" category.

Yeah, I was aware that there was locally produced wine in Bali. I guess my point was more to the environmental factors that effect wine production and taste. Rather than a straight out cannot be done approach.

Alcohol is not a big deal , there is more problems with drug consumption in Indonesia and that is an issue. When you go to bali it is easier to buy drugs than buying a bottle of alcohol and that is CRAZY!!! We import so much alcohol yet it could be produced locally, it's better than producing dangerous Arak.

Pretty helpful material, thanks so much for the article.