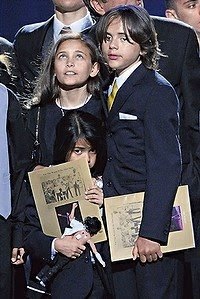 Joe Jackson who had a really poor relationship with his own son, the recently departed King of Pop (aka Michael), has been on television suggesting that Michael Jackson's three children: Prince Michael, Paris, and Prince Michael II (aka Blanket) are already showbiz material with the potential to carry on their father's legacy.

This is troubling to me. These kids were never going to have normal childhoods anyway, but these kind of ramblings by Joe Jackson on Good Morning America are exactly the reason these kids need to be looked after by someone else. This someone has to be someone that has the childrens' best interests at heart rather than some grand plan of their own to exploit these youngsters for all they are worth.

It seems that Paris, at least according to Joe, is already ready to do something in showbiz. It is said that Blanket can dance. And, that Prince Michael is already lining up a virtual duet with his dad in the Natalie Cole / Nat King Cole way.

This is not the only rumour doing the rounds. It is thought that the children are going to do a special birthday concert to honour their dad on what would have been his 51st birthday.

I just hope that someone sees the light. These kids need to be given every opportunity to have a life that is as normal as can be. I hope that they are not robbed of their childhoods like their father was.
Posted by Rob Baiton at 22:25

Yeah, I agree.
Just let those kids choose what they want to do in the near future.

I was reading today that it seems like Joe's plans for the kids has caused more tension among the Jackson clan.

You do have to wonder about a man who plugs his own record company on the back of his son's death and then tries to sign up his grandkids to his own label.

I read so much useful data above!