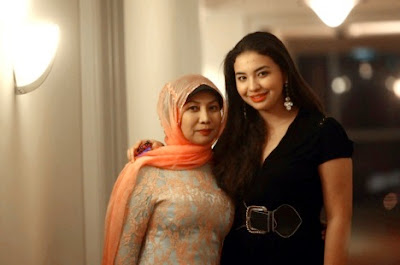 I have also written extensively on Schapelle Corby. The fascination for me is with the legal issues that are inevitably going to arise in this case, assuming that either side ever gets around to fully pursuing the legal aspects of the case.

Unspun, over at the Unspun blog, also has numerous Mano themed posts at his place. By the way, Unspun my increased rate of frequency in Mano-related posts is not the beginning of a competition amongst us :D

The prince appears to be a little more committed to pursuing the legal avenues available to him. This is of course when he is not helping out on the movie he is making about the stormy marriage he had with Manohara. The marriage is going to be shown to be breaking down as the result of an over-bearing and interfering mother of Manohara / mother-in-law to the prince.

The prince has filed two cases recently at his local Sharia Court in Malaysia. The first seeks a reconciliation with his wife. The other is a claim that Daisy Fajarina and Manohara borrowed almost 1 million ringgit from him, and that money has not been repaid. This works out to be a debt of somewhere in the vicinity of USD 276,000.

Hey, if it is true that they owe the prince money, then they should not have much trouble in repaying it as Manohara has just scored a soap opera part reportedly paying more than IDR 1 billion.

Daisy has denied owing the prince any money. According to Daisy the real issue is that the prince forbade Manohara from working and earning a living. I don't know, I would have thought the real issue was why the prince, allegedly kidnapped, raped, and abused his young wife. Then again that is just me.

Daisy Fajarina is always good for a chuckle. Some of the comments attributed to her include, "he would have to prove his accusation before a court." Ah, I am guessing that is why he filed the complaints that he did in a Shariah Court. Besides proving something in a court of law is no guarantee justice is going to be done. It is not impossible that the parties would try and dodge their obligations by fleeing the jurisdiction or not presenting themselves for punishment. And, ending up subject to an Interpol Red Notice.

Daisy also wonders why the Shariah courts are even hearing the prince's complaints. As far as Daisy is concerned, the prince has violated every law of Islam in his treatment of his estranged wife.

The plot thickens as the saga continues.
Posted by Rob Baiton at 19:15

You are suffering from WKS (aka White Knight Syndrome)

Rob, never considered it a competition, rather a joint fascination