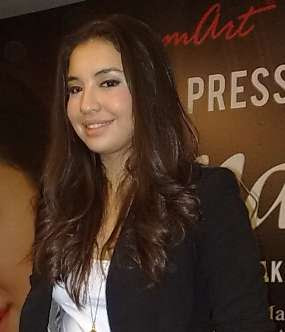 It seems that there are plenty of part-Indonesians in the news of late looking at learning Indonesian (Bahasa Indonesia) for one reason or another. For example, the recent winner of a Miss Indonesian pageant confessed to not being a fluent speaker of Indonesian and to a need to learn more (I wrote about this here).

It seems that Manohara, or Mano to her friends, is also looking to brush up on her Indonesian language skills before making her debut in a locally produced sinetron (Indonesian soap opera). The local Indonesian media have been following this unfolding issue and there is an article at detikhot on it, here. It is probably a good thing that Mano has decided to brush up on her Indonesian seeing that she is reportedly receiving at least IDR 1 billion to star in the soap opera that bears her name, Manohara.

Mano's story is certainly an interesting one. She has been at some point or other the one-time underage squeeze of Anindra Ardiansyah Bakrie, an under-age bride for a Prince from Kelantan State, and now a bona fide sinetron star. The story has some unsavoury undertones in that there are still outstanding allegations levelled at the prince that he was abusive towards her. This physical and sexual abuse was reportedly extreme. Nevertheless, Mano seems to have recovered sufficiently well to move on and take the next step in her evolution.

Mano is not taking her recent good fortune lightly and is going to allocate some of her sinetron earnings to establishing a foundation. Presumably the foundation will be for those less fortunate in there post-domestic violence lives than Mano. Even more of the earnings are going towards buying land and building a mosque. Maybe the foundation and the mosque building initiative are related.

When it is all said and done, I hope that she finds success and peace in her life. If starting an foundation and building mosques is what does that for her, then so be it.
Posted by Rob Baiton at 19:41

With this many posts on the one subject (a girl) one might deduce that you have a slight obsession with the young lass. I know not fair!!

Nah, just interesting issues and it is already a soap opera even before it becomes a "soap opera".

The whole thing is ridiculous and the media are already making money out of it :P

Yep, particularly for those of us not making any money out of it.

I still don't know whether it would be every young girls dream that they run off and marry a prince, be raped, abused, and kidnapped, and then end up on all the local gossip shows and get your own soap opera.

All very bizarre for me.