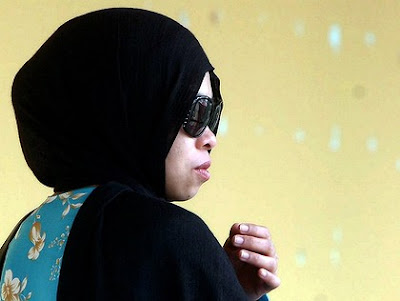 It seems that the decision of the Sharia Court in eastern Pahang State to cane a Muslim model, Kartika Sari Dewi Shukarno, for having a few beers in a nightclub has not been greeted with universal approval in Malaysia. The debate centers on the idea that convictions and sentences like this are rare in Malaysia where alcohol is widely available for consumption. There is also a belief that where an individual sins against their religion in this manner; drinking alcohol when it is forbidden, has sinned against God and therefore it is God who should mete out the punishment.

I have always argued that for those of us who sin against our religions or our Gods will be punished by our respective Gods when the time comes. There is no need for us insignificant human beings to get involved and take over the primary punishment role from God. Let's face it, I have some serious explaining to do come judgment day:

God: So, you spent your life doing good things and helping people less fortunate than yourself. You contributed to making the world a better place. But, not one day in your life did you acknowledge me or my existence, in fact you told everyone who asked that you did not believe in God. You told everyone that you were doing it because you were a good bloke and it was the right thing to do! Therefore, here's my question for you now, "what you got to say about that?"

Me: God, that is a good question. To be perfectly honest, I just figured I would be worm food and that would be it. I had never really contemplated having to come back and justify myself to you. But, God, here's my question to you, "why did you not reveal yourself to me in a more tangible way that would have made believing in you a whole lot easier proposition rather than irrational faith?"

You can see where this conversation with God is going.

There is little doubt that the punishment is harsh. Interestingly, it could have been a whole lot more harsh as the law allows for up to 40 lashes with the rattan cane. And, in all likelihood it is not going to deter those Muslims in Malaysia that want to drink alcohol from drinking alcohol. Where there is a will there is a way, simple.

Shukarno, though, has decided that it would be best just to get the punishment over and done with so that she can go back to living her life. And, she hopes that others learn from her experiences and refrain from drinking alcohol (or more specifically from getting caught).

The caning methods are set out here. It would appear that in many ways that the caning is as much symbolic as it is meant to cause pain in this case. Although, most canings I have read about talk about causing open wounds that leave nasty scars on those who are on the receiving end of the caning. This though is allegedly not the case here. Shukarno will be clothed, the cane will be shorter than usual, and the person doing the caning cannot raise the rattan above their head.

I wonder if there will be video of the sentence being carried out that will make its way onto YouTube or something. If you can get video of Saddam Hussein's hanging onto YouTube, then one would think the caning of a model should be easy.
Posted by Rob Baiton at 18:02

I'm wondering if the picture is representative of her garb on the night of the said offense. If yes, then no wonder she was caught as it was certainly not good beer drinking attire.
Maybe I should consider an online advisory service.

I am guessing not representative. It is always the way, isn't it? You get busted and then you adopt the requisite outfit to show that you have remorse for what shame and embarrassment you have brought to yourself and your family.

Maybe you should. There is no doubting that you tell it as you see it :D

I have always argued that for those of us who sin against our religions or our Gods will be punished by our respective Gods when the time comes.

are you suggesting we leave murder till judgement tday??

No, I am not. To suggest that in the context of what is being written here that I am trying to suggest that murder should be left to judgment day is an interesting attempt to manipulate that context.

The piece is on alcohol consumption, and in this case by Muslims, where the punishment is proscribed in a religious court.

This is distinct from the generally applicable law in courts where punishment is handed out to all citizens of Malaysia irrespective of their religious preferences. Simply, the Indian and Chinese minorities are not subject to the same laws.

Now if the prohibition against drinking alcohol was contained in the general law and applied to everybody then it would no longer be a sin in the eyes of God but also in the eyes of the state. This, I think, you would agree is a different context to the one that I was discussing in this post.

From my understanding, religious courts in Malaysia do not deal with murder trials. If I am mistaken on this and you can set me straight then I am more than happy to note that mistake in a correction.

There is little doubt though that if there is a God then committing a murder is likely to see you need to explain your actions a second time round as I am guessing that double jeopardy does not apply.

Hope this clarifies my intent for you. If not, I am waiting for the next question :D

It won't work in actual fact, that is what I suppose.