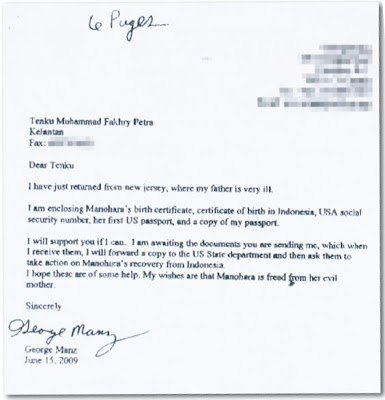 The saga continues. It is somewhat addictive for me as there is just so much to process and analyze from a legal standpoint. It seems that the Malaysian press is coming up with the far juicer pieces for the gossip columns. The following piece is based on an article from the Malay Mail.

George Manz is Manohara's biological father. He is a engineer that was formerly based in Indonesia. He met Daisy while he was in Jakarta in 1989, presumably fell in love, and the rest is history as they say. Mano, as she is affectionately known, was born in 1992. Not long after this things apparently went wrong fast and Manz claims that Daisy stole his daughter away from him. He also claims that Daisy is a proponent of black magic and has an evil hold over his daughter.

According to Manz, the black magic proof is in an x-ray of Mano's mouth. It is claimed that on a visit to a dentist an x-ray was taken and this x-ray showed gold needles and diamonds embedded in Mano's chin. I do not know how this proves black magic is in play. It would seem to make more sense that Mano was about to become a mule in a smuggling operation.

Nevertheless, the black magic claims aside, Manz has agreed to help the prince in his fight against the evil one, aka Daisy Fajarina. Manz sent a letter to the prince outlining his desire to help, his belief that the prince can save Mano from Daisy's evil influence, and sent documents that he believes might assist in the fight.

The whole affair is about to get a whole lot more interesting in a legal sense as Manz is threatening to get the US State Department (some Hillary Clinton involvement?) involved, Mano is a US citizen, and it would seem that the basis of the pursuit might be some form of international child kidnapping scenario.

However, it is a little late one would have thought for Manz to be coming forward now, particularly when he says that he has been following the case from afar with the help of friends in Singapore and Jakarta.

Another aspect of the case which has had some coverage in Indonesia is the legal problems that Daisy has herself and the outstanding Interpol Red Notice that requires local police agencies to facilitate the apprehension of her. Indonesia has an Interpol liaison office.

It would seem that Daisy knows a lot about the sexual abuse of young and vulnerable women having participated in the perpetration of such abuse herself. If she is really so shocked and abhorred by such conduct then she must show that she has the courage of those convictions and return to France and face the legal music there.

I am sure the symphony that is planned for her on her eventual return is going to be far from the sweet music she thinks she might be able to enjoy in Jakarta.

Extradition treaty or not with France, Indonesia must show that it is committed to the elimination of all violence against women, even where this violence is perpetrated by women against other women.

Simply, Indonesia must comply with the red notice and facilitate the detention of Daisy Fajarina and allow her to be returned to France. The only way that this should not happen is if Daisy can show, and prove, that the process against her was fatally flawed and that the sentence imposed upon her was legally wrong.

As much as I might feel for Mano's plight with respect to the allegations she has made against the prince, and even if the allegations are true, this cannot and must not become a get out of jail free card for her mother.

Simply, Daisy Fajarina is not a victim here. If anyone is a victim then Mano is, assuming that the allegations can be made out. And, to date, they have not been made out. The truth is that Daisy is the perpetrator of some serious crimes of violence against another woman for which she has not paid the price.
Posted by Rob Baiton at 20:58

With regards to Daisy practicing black magic, and x-ray scans showing gold needles and diamonds in Manohara's chin, this is still a wide-spread practice in both Indonesia and Malaysia. The gold and diamonds have spells (and spirits, too, in most cases) attached to them that serves to make the wearer appear attractive - hence, why many people in both countries regard Manohara as a ravishing beauty while Westerners might think she is just plain and ordinary (the spells mostly only work on people who believe in them). This implant is called a "Susuk", and is unbelievably still popular with the rich and supposedly-modern women in Malaysia (I wouldn't know the user demographics of these implants in Indonesia). Your post is the first time I'm reading about Daisy's involvement with black magic (I've given up on following the Manohara case), but it comes as no surprise and actually clears up some hanging points for me.

Thanks for dropping by and leaving a comment. Comments are always appreciated (and this one is informative too)!

I do not know either of the stats or the demographics for this sort of thing in Indonesia either. I am sure someone has got to have done a PhD thesis on it at some time.

I do think that she looks plain. I had not attributed this to the golden needles and gemstones though. I just figured that others were seeing something that I could not.

There is also this fascination with the idea of mixed-race Indonesians being very pretty or handsome. I thought that this might have been a part of it too.

Then again, I have really been focusing more on the legal issues rather than the magical ones.

But, thanks for the explanation. I figured that it was something like what you have said it was. Although, truth be told I had not bothered to check it out, and now I do not have to.