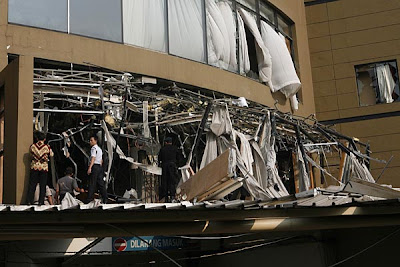 The news that the JW Marriott and the Ritz-Carlton were bombed this morning at about 07.45 Western Indonesian Time was not surprising. The idea that Indonesia was free from the prospect of terrorist activity was naive at best and negligent at worst.

My condolences go out to all of those that have lost loved ones or had loved ones injured in the blasts.

The fact that there are several high profile terror suspects still at large and suspected of being in Indonesia must be enough to ensure that security is taken seriously. In many respects, this morning's tragedy was as much to do with it "being a matter of time" and complacency than it was to good planning by a group of terrorists.

I lived in Indonesia for many, many years and have only recently returned home to Australia. I returned home with my family, this was not because of any fear of terrorist bombings, although now that we have returned to Australia, it seems like it was a wise choice. I still feel Indonesia is generally a safe place to live and we would return in a heartbeat for the right opportunity.

I have been to the Marriott on many occasions and have always found the security presence extreme. It is always an interesting sight and experience seeing young men with high-powered weapons screening visitors. That said, the screening of vehicles although giving the appearance of being strict is quite often not what it seems.

Generally, the checks are cursory and sometimes leave a lot to be desired. I have always wondered if those checking vehicles had actually been properly trained in what to look for. Nevertheless, it is these types of checks that gave rise to the complacency that Indonesia was over the terrorist hump and on the homeward stretch to ever-lasting peace, security, and prosperity.

Nevertheless, back end security is not what might be expected.

No one has claimed responsibility for the attacks. However, time will tell in terms of where responsibility for this horror will fall. It is unlikely that this is Jemaah Islamiyya for a number of reasons, but paramount among these is that JI is unlikely to have maintained the organizational capability in the period after 2002 and the post Bali bombing. However, this should not rule out a splinter group with some kind of loose affiliation with JI.

In any event, I guess these blasts go to show that Australia's travel advisory warnings were on the money with respect to possible terrorist attacks. (I would add here that if you maintain the tone of the travel advisory and keep it in place for long enough that ultimately the odds of being right would shorten to the point where you actually are right at some point in time.)

It was interesting to hear an interview with Kerry Collison earlier today in which he suggested that the bombings had all the hallmarks of an Indonesian military operation. The implications of military involvement is something that one does not really want to consider as this does not bode well for political stability in Indonesia over the long term.

The time is now for Indonesians to stand up with a united front and say that "enough is enough". It does not matter whether you are Muslim, Christian, Buddhist, Hindu, Animist, or whatever, no sane person can justify the killing of innocents. The simple reality here is that there is absolutely, let me repeat - absolutely, no chance of winning the hearts and minds of people by killing them. When will these terrorists understand that killing your own is just not going to get you the sympathy that you might feel the masses owe you. Stupid!

While Indonesians take a stand against terror in their own land, those of us who can must support our Indonesian brothers and sisters in whatever capacity that we can no matter where we live. I will do whatever it is that I can to help.

Violence is never the answer!

For any how have taken umbrage at some of the content of this post or the point and purpose of travel warnings or the like, irrespective of whether you leave a comment or not, I offer no apologies as it is a blog and these are my opinions and "out loud" thoughts on this issue.

I love Indonesia and her people dearly. The country has been an integral part of my development as a person, and for that I will be eternally grateful. I will always feel I have received more than I have given (although there are probably plenty of Indonesians who might disagree) but I will continue to give until my days end.

The point about terrorism is not what religion the perpetrators follow and I do not talk about Muslim or Christian terrorists, just terrorists, those individuals that would seek to disrupt the peaceful existence that the majority of us try and find in our comparatively short time in this world. The point is that there are those who will go to any length to kill and maim the innocents in pursuit of a cause and despite the in-roads Indonesia has made in getting on top of terrorism and some notable successes this has led to a degree of complacency and the idea of it being "only a matter of time".

I saw it and I was fearful of it in the sense that I truly believed it was only a matter of time.

Those that hate exist in all societies and they will always at some point in time make their presence known. Friday, 17 July 2009, was one of those days in Jakarta.
Posted by Rob Baiton at 19:12

"...Kerry Collinson earlier today in which he suggested that the bombings had all the hallmarks of an Indonesian military operation..."

--- Exactly what are the hallmarks of a military operation? Sounds a ridiculous claim to me - especially given he would have said this only hours after the bombs.

I think I was watching CNN at the time. I will need to go and see if I can find a transcript of the interview.

I chose "suggested" for a reason, as I only heard the interview once and it was more in passing than anything else as I was in conversation with the old fella about the pros and cons of life in Jakarta / Indonesia.

There has been much made of the supposed links between the Indonesian military and the training of individuals and groups that engage in terror.

However, if at some point it was to become evident that there was some military link then my point stands that this is scary.

I won't get into the SBY links and the alleged cover-up in the killings of a couple of US citizens in Papua a few years back. Nothing like a good conspiracy theory to get people talking (or arguing).

I will do a little more research and see what I can turn up and then post a postscript.

Apologies...It should also be Kerry B Collison!

Typo on my part.

Congratulations on your post. If you had not said that then and there I would have been disappointed. I do however consider your title ill chosen.

I note less a sense of shame in those speaking out, than in the past - more a general sense of disgust at the irresponsibility

I generally prefer my anonymous commentators to adopt a pen name so that I can distinguish one from the other.

With regards to the title, it was chosen on purpose as it is intended to reflect the cycle nature of the bombings to date in Jakarta and more generally, Indonesia.

It is very much like the seasons, they come and go. Sometimes the seasons are a little bit further apart than at other times. But it remains cyclical to my mind.

sorry it seems my name slipped off the screen. T'was Lawritz.

A season implies a continuation until fruition, ripeness, a completion. I dont want this to go any further thank you.

Once again, terrorists have killed and wounded innocent people. My sympathies to the victims of these tragic attacks and their families. If you want to know more I have collected some good sites or articles (around 200) to get lots of latest information about Jakarta Bombings of 2009 at the Marriott and Ritz Carlton Hotels (covers the news, videos, pictures etc.,). Check the below link
http://markthispage.blogspot.com/2009/07/all-you-want-to-know-about-jakarta.html

A "season" signifies a little more than just a continuation to fruition, ripeness, or completeness!

Let's look at the four seasons, winter; spring; summer; and autumn (or fall if you so prefer). Each of these might signify completeness in any one cycle, but the key word is cycle and the seasons return again the next year.

The title, at least, in my mind fits to part of the point that I was trying to make.

The idea that in the title I am suggesting that I want the seasons to continue is absurd. I would be happy to see this type of season end with these heinous killing of innocents.

However, as I noted in the postscript, there are always those that, misguided as they are, are committed to a cause in which they have no qualms about killing.

Therefore, once again, the idea that, whether we like it of not, there are those out there that would kill us in pursuit of their cause.

It is a vicious and ugly cycle.

I will be sure to swing by and check out your collection. The rest of my readers can do so at their own leisure.

I guess my emphasis is contained in the saying "one swallow does not a season make" - or something along those lines. I do note Clive Williams reference to the JI cycle.

On tv - Meet the press and on Insiders. A bit droll actually..

I watched the Stephen Smith interview on Insiders but that was it.

I was not expecting any big revelations anyways. I usually expect the same old, same old drivel and I am not usually disappointed.