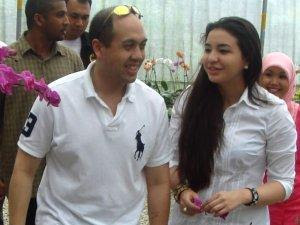 The Manohara saga just keeps getting more saga-y with each passing day. I know that I am having fun following the to and fro between the young Indonesia starlet in-the-making and victim of domestic abuse, Manohara, and her estranged husband, the Prince of Kelantan State, Tengku Fakhry. I am guessing that Unspun is also enjoying it. Unspun has been covering the whole story a little longer than I have.

However, Unspun does have the excellent idea of a soap opera shootout with the best soapy being crowned the crowd favourite, where Unspun and yours truly act as the judges. I am up for that. As 'Big' John McCarthy would say in the UFC, "let's get it on!"

As most of my loyal readers are aware, Manohara has kicked over her entry into the soap opera realm with her self-titled, Manohara. I have not watched it as it is not available in my neck of the woods. Although there are a few of us who are thinking about lobbying our local multicultural broadcaster to pick it up. However, some of the people I have alked to that watched it said it was only average viewing as Indonesian soap operas go. And, that Manohara did not have all that many lines. So, it is probably a good thing she is not getting paid by the word or the number of lines she speaks.

Not to be outdone by his estranged wife, Tengku Fakhry, has decided to tell his side of the story through a movie. It is being billed as his version of the Fakhry and Manohara love story. Yet, in recognition of the fact that the marriage was not all wedded bliss and peace, harmony, and love, the working title of the Prince's film is "The Stormy Love Story of the Prince" or in Malaysian "Kisah Prahara Cinta Pangeran".

The film is to be directed by Malaysian director, Kardi Syaid. Interestingly, the stormy relationship in the film is going to suggest that the love affair went off the rails because of a third party. It would have been better if the third party had been some adulterous stud who swept the young bride off her feet even though she was married to a prince. Unfortunately, the third party seems to be an interfering mother-in-law, who allegedly has enough legal problems of her own that she does not need to be getting involved in those of her daughter.

I have to say, movies with gratuitous violence and kinky sex are always likely to do good business in Indonesia. I am not sure how the over-bearing mother angle will work though. The film is sure to be interesting as the director has already suggested that the reporting of the "facts" in the case have all been one-sided and it is time that people learned the real truth.

I do not know about the rest of you, but I am kind of looking forward to a knock 'em down, drag 'em out bar fight through the small and silver screen mediums. The film is likely to have some authenticity to it as the prince has granted permission for the actual Kelantan State Palace to be used as the location for the shooting of some of the scenes.

I guess that the real issues will have to wait to see the light of day in the inside of a court room. It seems that the most pressing matters for these two former love birds is a grudge match on the screens of out living rooms and movie theatres. Sounds like fun!

Let the battle begin.
Posted by Rob Baiton at 18:38

I'll sorry...... but really!! I'm no oil painting and have even been described lately as a cross between Jack Black and a Gorilla (thanks Rima), but I can still stand to see my own image in the mirror even in the morning (albeit a late morning) after a tour of the Blok (M). This girl is just ugly.....sorry not "plain".... butt ugly!!! I have seen better looking bashed crabs!!!! The best thing to improve the ratings would be the bag her head and get the felt pen out. Crikey!!!!!!

Mate, tell us what you really think of Manohara.

You, obviously have not been effected by the black magic then. The rumor goes that Manohara has gold needles and diamonds embedded in her jaw. Apparently, this makes you more attractive.

Rob ,
Like I said the only thing that would make her more attractive is a pillow slip and some twine (Just so the pillow slip couldn't be taken off)
That's 20 beers and a bloody dark night ugly!!!!

Go on tell me I'm wrong.

I know beayty is in the eye of the beholder, but it would have to be a glass eye....RIGHT!!!

Sorry about the miss spelling, proof reading is a weak point.

Ill stick to commenting on the set. The palace is going to kill a creepy kost with plywood cupboards and doors and small verandahs.

Public figure hogging the media, should be fair game to comment on the visual pollution!!!

I am thinking on the spelling front, my comment should have been affected rather than effected :D

I don't know that she is ugly. I would have said plain. I have seen some really stunningly beautiful women in my time (in Indonesia and other places -- with my wife being the most stunning of them all :D). Manohara just does not fall into that class.

As I said, I am no stud muffin myself, so I cannot see myself calling her out for being butt ugly.

Pillow slips, twine, 20 beers, a dark night, some paper bags, and a felt-tipped texta! Sounds like someone was living it up in their youth ;)

Maybe GJ knows more about the sets than I do. As I have said before, I am not living in Indonesia at the moment and therefore have not had the opportunity to watch Manohara the soap opera.

I am guessing though that the Kelantan State palace might make a pretty impressive set.

As a public figure being passed off as an Indonesian model, then I think that people are entitled to an opinion on the matter. One might not agree with those assessments, but they are what they are, opinions.

Agreed. I think that if you want to pass yourself off as a hot Indonesian model then you have got to be expecting that people are going to comment about that.

Particularly, whether you are as "hot" as you tell everyone you are or as "hot" as the people marketing you say that you are.

@Rob: Or maybe we can mix and mash the two movie/sinetorns. That would be cool.

@GJ: Manohara doesn't look worse that many of the pembantu-looking types that some people go out with.

And, stop baiting my readers with the pembantu analogy ;)

I agree she does not look any worse, nor does she look any better. My point was only that she looked "plain" considering she is supposed to be some hot model.

Yep, GJ, much like yourself, does not hold back on giving his opinion on these type of matters.

Although, with respect to "butt ugly", I don't think Manohara fits in that class. She is just plain looking to me. I can think of others though that would fit the butt ugly description ;)

Grin..only teasing..if Unspun can to trump up traffic then so can I :-)

Actually I probably would not have been as graphic as GJ. Seriously though despite the cultural differences in "beauty" she could not be considered a stunner (worse than plain IMHO could she? Is there something that I am missing that makes her attractive to her Indonesian "audience"?

Funnily enough, I was thinking the same thing with regards to traffic / visitors.

I tried making a post with some funny albeit risque videos and some interesting tags. However, that has done nothing for traffic or visitor numbers.

So, maybe a battle over bules and pembantus is the way to go :D

Are you missing something with Manohara that others can see and that you cannot? Yes!

Black magic! It is the golden needles and diamonds that are embedded in her jaw ;)

The comment to Unspun about baiting my readers was tongue in cheek (just in case). No harm intended!

If I recall correctly, it is a subject that Unspun has broached over at his humble abode.

Interestingly that post that got me most traffic was a questioning of the #indonesiaunite movement - asking together with Anita what next.

So if you want to boost the traffic question that and you'll have the entire bandwagon at your doorsteps.

Wow. I thought I was the only one who thought Manohara was ugly. Then there was GJ!

I seriously couldn't find anything that was so interesting about her, she's not even remotely pretty or anything, just average.

There are better looking sinetron actresses out there. I wonder what's her charm that makes everyone so interested with her.

I thought about an Indonesia Unite post. Although, it seems like there are plenty of people on that one already.

I am not surprised though. I noticed the Facebook listing always seems to be getting lots of "... likes this" and comments.

Maybe, Indonesia Unite will be my next traffic / visitor ploy :D

I did not say she was ugly. There is a difference in my mind between ugly and plain.

It is the black magic!

Rob, sorry about this, but I need to speak/type to your readership.

Therry, From the internet pics I have seen, you are drop dead gorgeous and only second to to Rima the "blog goddess" ( but that's not a fair comparison). Why aren't you starring in some sinetron production even better still, a movie, you need a better PR agent. Girl you rock!!!

Oigal, what you are missing is glaucoma. She is more than just plain she is the whole squadron!!!!

Unspun, This is not about Pembantu types, it's about about media hogs that are way beyond plain looking!!!!! the pembantu types that aren't seeking this level of "exposure" I have no problem with, as I said I'm no oil painting myself.

Finally Rob, I think your "obsession" with "Miss Bashed Crab" 2009 biases your opinion. Sorry to say, even if she is a damsel in distress.

Just trust GJ on this one the girl has NOTHING!!!!!! You know I'm right on this one.

PS Rob what is your record for comments on a single post???????

I will leave the Rima / Therry love fest to you. But I would agree that both are surely not in the plain category ;D

What you're missing is glaucoma -- ouch!

Unspun can reply to that point if he wants to. Generally, though most pembantus chasing bules are not looking for a sinetron gig. Then again most are not a Bakrie or a prince.

Fascination, mate, it is a fascination! :D

I am supposed to trust a fella in a red and black shirt with some white trim? ummmmmm? OK.

I think about mid 20s. So next time it would be better if you made a separate comment to address each of the other commentators. So we could have had a comment for Therry, one for Stump, one for Unspun, and then one for me! :D