The Terminator vs. The Road Warrior (Mad Max)... 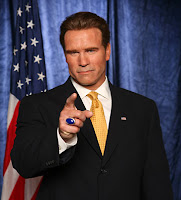 This is sure to be a much better offering than the "Predator vs. Alien" film or the other classic two franchise spin-off of "Freddy vs. Jason". This is better because it is like reality TV and involves Arnold Schwarzenegger, current Governor of California (aka 'the Governator') vs. Mel Gibson (aka misogynist, anti-Semite, racist and alleged beater of women).

Arnie was in some good comedic form at a recent gig where he was supposed to be talking to a group of utility commissioners in Sacramento about energy issues and ended up comparing Gibson to the environmental disaster that continues to unfold in the Gulf of Mexico.

Now, Gibson has been in the news over the years for his inability to control his outbursts, seemingly this is exacerbated by alcohol and more recently dementia drugs, apparently. The most recent spray was directed at the mother of his youngest child, Oksana Grigorieva.

In keeping up the game, the governor added that participants probably should turn off their mobile phones as they were expecting a call from Gibson.

Ouch, Mr. Governator! That was a cheap shot, don't you think?


Just as a side note. I have wondered whether it is possible to separate the man from his acting? I only ask because, I have enjoyed watching some of his movies. As a man though, I do not have a lot of time for a fundamentalist catholic with a family history of denying the Holocaust, who is anti-Semitic, racist (his latest rants included derogatory references to blacks and hispanics), and a misogynist. So, that's why I wonder whether I can separate the man from his acting and feel comfortable with the fact that I have enjoyed some of his films.

On another side note. It has been theorised and speculated that Gibson has been using Chantix to quit smoking. Chantix is also used in the treatment of Alzheimer's and dementia. The side effects of this drug are nasty to say the least. Not that this is an excuse because some of his behaviour and attitudes predate him taking this drug, but it is a mood changer for sure.

There are some pretty serious allegations against Mel Gibson with respect to domestic violence and abuse of his girlfriend. These allegations do, and should, attract jail time if the offender is found to be guilty.
Posted by Rob Baiton at 11:26

Really effective information, much thanks for the article.