Susilo Bambang Yudhoyono, or SBY as he is affectionately known to the masses, has ordered investigations on the recent arson attack on the offices of Tempo Magazine and the brutal beating (and stabbing) of Tama Satrya Langkun of Indonesian Corruption Watch.

The Tempo attack was a couple of Molotov cocktails thrown at their offices by unknown assailants. The attack follows hot on the heels of an edition of the magazine which reported police corruption. The whole print run was allegedly purchased by police as a means of keeping the edition of the streets. It must be noted that the police deny any role in purchasing the magazines. The Langkun beating and stabbing also comes hot on the heels of some whistleblowing on alleged police corruption and the funneling of very large sums of money into the private accounts of police officers.

Funnily enough (in that sad and perverse kind of a way) The Jakarta Globe is reporting that the president has been following these incidents through the mass media! Really? The president is relying on the mass media for his security and political updates. Now that is funny, and sad! 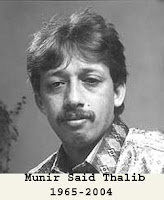 SBY has proven to be a real disappointment to many Indonesians. He is a man who came to power and the presidency on claims that he was a corruption fighter and a change maker, the undeniable game breaker. He was going to change the way politics was done in Indonesia. This has sadly not been the case. His legacy will be one of not meeting the expectations of the Indonesian public. History will not necessarily judge him in a positive light even after the passage of much time. Too many bad things have happened on his watch. He will be remembered for failures such as the Munir case. In the Munir case he assured Munir's widow that justice would be done and the perpetrators would be brought to justice for their crimes.

So, it is little wonder when SBY comes out and states unequivocally that it is important that law enforcement capture the perpetrators of these two crimes and then prosecute them to the full extent of the law that most people start to shake their heads and go "whatever!" This is particularly so when the president goes on record to say that it is a third party that is responsible for these crimes, and this party is taking advantage of the situation to further sully the police force's good name. Huh?

Should the above be construed as the president is in the know, and he in fact knows that the perpetrators are a third party? Or could this be construed by those cynics and conspiracy theorists among us as a deliberate attempt to deflect attention away from the police and parties related to the police?

In many ways, Indonesia's future depends on it!
Posted by Rob Baiton at 16:57

I suppose one and all should browse on it.