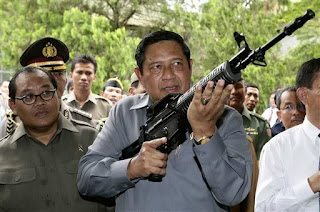 The president, Susilo Bambang Yudhoyono, came to power on a platform that saw him proclaiming himself as 'clean' and a dedicated and proven corruption fighter who had the ability to change the status quo from one of accepting corruption as part of the deal to one where corruption was actively and vigorously pursued where perpetrators were prosecuted and jailed. After a full term in the big chair and already into his second stint in the big chair it is hardly any wonder that people, Indonesians and those interested in all things Indonesian, are beginning to question SBY's anti-corruption credentials in light of his perceived failures to make any serious headway into combating and eradicating corruption from the Indonesian way of life.

On the bolting the gate after the horse has bolted front, the president has suggested that the recent revelation that there are some 21 high-ranking police officers with outrageously large sums of money deposited in their personal bank accounts that clearly far-exceed their income potential based on their current salaries as serving police officers.

The news, as it started to spread and gain a public foothold, saw one of the owners of one of the alleged accounts coming forward to state that the IDR 95 billion in his account was all sourced from legitimate sources. To this end, evidence has been produced as to who made the deposits what is not so clear is why these deposits were made or the links to his role a a police officer. Yet, in any event, the allegation, and the subsequent investigation, would be best led by an independent observer. In this case, perhaps the best qualified for the job would be the Corruption Eradication Commission (KPK) sans any police involvement. At least there would then be an expectation that the investigation would be transparent.

However, in his infinite wisdom, the president has decided that this is an internal police matter and that it would be best investigated internally utilising already existing police investigative abilities. What is truly bizarre about this is that the president reckons he is a corruption fighter, but he cannot see that the public would perceive the police investigating themselves as nothing more than a whitewash waiting to happen. The police are, on most perception indexes, one of the most corrupt of Indonesia's institutions. Therefore, the idea that the police are capable of investigating themselves is sure to leave a bitter taste in the mouths of many many many Indonesians.

The president clearly has no idea and is getting very poor advice. Maybe it is time to call in some professional PR people to manage the message to ensure that he and his people stay on message. In the meantime, it is time that the president developed some testicular fortitude and became the corruption fighter he has so often proclaimed to be.

With respect to your legacy Mr. President, it is now or never. And, never seems to be rapidly approaching!
Posted by Rob Baiton at 17:11

Hi Rob,
Your post reminds of bitter fact:
Before and during his election campaign, KPK has "helped" by carrying out various anti-corruption campaigns. After that, he seemingly want to eliminate KPK's power.
Therefore, I doubt that there will be a stronger anti corruption efforts.

Now might be as good a time as any for SBY to surprise the Indonesian people with a full-frontal attack on corruption as a means of securing some kind of legacy of which he could be proud. Then again, maybe not!

The writer is totally right, and there is no skepticism.