The Crocodile Files -- Stupid Is As Stupid Does... 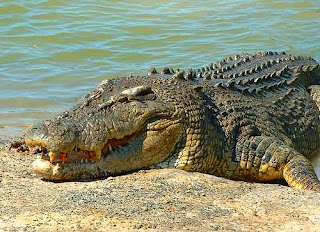 Here is one for the truly stupid files. An Australian man has been bitten by a saltwater crocodile after breaking into a crocodile park and trying to sit on a crocodile and give it a pat.

Are you shaking your head yet? You should be! And, having a little chuckle to yourself as well.

Yes, an Australian man holidaying in Broome in the northwest of Western Australia decided that he would scale a barbed wire fence and break into the Broome Crocodile Park. Now, it would seem that the man's courage is directly proportional to the amount of alcohol that he consumed, or perhaps the directly proportional angle here is alcohol and stupidity! In any event, after having been kicked out of a local hotel for being too drunk he decided that to sober up he needed to pat a crocodile.

Picture this...a drunk man breaking into a crocodile park to pat a crocodile. Where does that rate on the stupidity scale for you?

The crocodile, affectionately known as Fatso, happens to be 5 metres long. Fatso was not so happy about his new passenger or the after hours wake-up call. So, after being sat upon, Fatso spun around and grabbed a hold of his passenger. Fortunately, for the passenger, Fatso decided he did not need an evening snack and let the passenger go. At which point one assumes the drunk bloke had a moment of clarity among the beer haze and scarpered quick smart to the safety of the other side of the fence.

The bloke was lucky. He escaped with some serious lacerations to the leg that Fatso got a hold of and that was it damage wise. Lucky, very lucky because as any keen observer of saltwater crocs will tell you, these are creatures that usually once they bite they don't let go.
Posted by Rob Baiton at 11:58

Hi Rob,
This story is frightening but funny as well. It is difficult to imagine how a man can fool around with a 5 meters long crocodile, and survive.

Not really frightening, just stupid! If he ended up dead, then it would have been pretty hard to blame the croc!

hahaha..agree that was a really stupid thing to do..well he was drunk.Will he be charged for trespassing?

Maybe. He has to get out of the hospital first!

and I should add, being drunk is not an excuse.