Revaldo -- Recreational Use or Addiction?

Some people never learn, and one of those who has not learnt his lesson after some prison time for drug possession is Fifaldi Suria Permana. Permana is a bit of a sinetron star and goes by the name of Revaldo (not to be confused with Ronaldo, either Christian Ronaldo or Ronaldo Ronaldo :D). This is the second time that Revaldo has been stung in possession of methamphetamines. 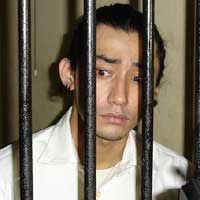 If Indonesia had a 3-strike rule he would certainly be on the bubble of a very long custodial sentence. Considering, the first time around he went for a 2-year stint in the slammer, a second offence so soon after teh first would seemingly warrant a longer sentence. At least, anecdotally, it would appear that Revaldo has a drug problem  that might be better handled with an rehabilitation intervention as opposed to another stint in the hole.

I am not a meth user, so I have absolutely no idea how much is a lot and how much is a little. However, the West Jakarta police allegedly caught young Revaldo with 50 grams of meth in his possession. Interestingly, the police revealed that they were tipped off about Revaldo heading out to meet his deal for a hit. The police followed him, allowed the transaction to happen, ans then pounced on their man. According to the police, Revaldo tried to make a run for it, but the car chase was over before it begun and Revaldo was arrested.

Yet, the kicker is in the police making public that they are watching 22 other celebrities. Now, if you are a celebrity and a user, you have to be wondering whether the police are looking at you...sounds like a good recipe for some paranoia!

So, is Revaldo an addict or just an unlucky recreational user who just seems to be prone to getting caught?
Posted by Rob Baiton at 17:55