Garuda Goes On A Spending Spree... 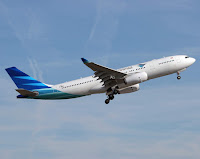 The Farnborough International Airshow has been a bit of a success in dollar spend terms with some USD 28 billion being spent on planes. Of this, Garuda has placed an order for six Airbus A330-200 aircraft. Garuda also managed to scrounge up enough left-over cash to place a USD 420 million order with Rolls Royce for the supply, service, and maintenance of engines for part of its fleet.

Does this mean that business is booming for Garuda? Or does it require new aircraft to ensure that it remains authorised to fly into the European zone? What interested me in this little news piece was that I recall when I was living in Indonesia that there were always financial management questions being raised about Garuda and its viability, which was interesting seeing it is the national carrier and all. So, ordering and taking delivery of six new aircraft from the end of 2012 is seemingly a pretty bold move.

I have only flown Garuda a couple of times. The service on the ground was a little 'iffy' at times, but was always excellent on the plane. I would fly Garuda again. But, I have tended to fly with the cheaper budget airlines when I have had cause to fly.
Posted by Rob Baiton at 13:48