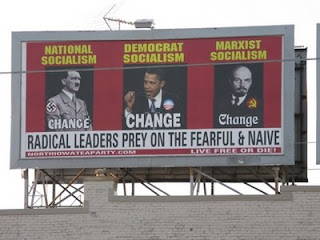 There must be something in the water up there in Iowa that the North Iowa Tea Party people are drinking in great amounts. Either that or they were sitting around having a few wines and thought this looks like a good idea, let's do it!

Do it they did. The North Iowa Tea Party created a billboard. Not just any old billboard, but the one here on the left.

Yes, folks, that is Barack Obama in the company of none other than Adolf Hitler and Vladimir Lenin. If it were me, I might of gone with Josef Stalin, only because he was probably even scarier than Hitler and Lenin combined. Some historians suggest that Stalin was responsible for the purging of some 10 million of his fellow Russians, his nearest and dearest colleagues. Enough on the tangent and back to the rant.

When are these people going to get it?

I am all for political debate, I am all for vocal opposition, I am all for freedom of speech. Despite the irresponsibility of comparing the current US president to Hitler and Lenin, I want to focus on how the exaggeration undermines the message. The undermining of the message is obvious. Other Tea Party members have been quick to distance themselves from the North Iowa crowd.

Obama is so clearly neither Hitler or Lenin. The last time I thought it through, I really could not see Obama taking the US down the path where he was looking at a final solution of eliminating all the Christian Right or some kind of concerted policy program of racial purification. Maybe I am missing something, but I think not! The comparison is not only offensive, it is stupid. It is stupid because it undermines legitimate grievances some US citizens have with the job that the president is doing, particularly his lack of success. Well, maybe they should have voted for the woman after all!

The point of the billboard is what? Socialism is bad? Well, if the message was that socialism is not in the best interests of all Americans then whacking Obama in the midst of these two is not going to make your point. The first reaction from most people is going to be offense at the exaggeration, and then the reaction is going to be that these Tea Party people must be a group of right-wing nutters who will next be arguing that the UN is running the show and there are black helicopters landing in the middle of the night on the White House lawn.

The message is lost in this billboard. The money would have been better spent on getting people out to vote in the November elections. Let people express their anger and disgust at the ballot box. Let them let Obama know what is important to them by voting out a whole swag of democrats at the next opportunity. The billboard is likely to create even greater apathy and inspire people to stay at home rather than head to the local polling booth.

As I said, I am all for freedom of speech. If these Tea Party people want to place a billboard like this, then so be it. I would probably argue that this is protected speech and they are free to make it. I would argue, and I am arguing, that the billboard is going to have the opposite effect to what was intended. So, in the public relations war, this was a big flop.

Once again, when are these people going to get it? Obama is not Hitler, he is not Lenin, he is not Stalin, he is not the Anti-Christ, he is just a man doing a job!
Posted by Rob Baiton at 21:16

Hi Rob,
If people who talk and act for the benefit of common men is considered as a socialist (leftist), how about the liberal (rightists). Are they only take side with the businessmen, etc? If yes, no wonder the socialist won elections in many parts of the world.

I guess I was wondering out loud on the wisdom of comparing Obama to the other two depicted in the picture. Particularly, I was questioning whether the comparison is valid or not, and then what damage this does to what might otherwise be legitimate grievances about the president's performance.

When I teach advocacy I always make a point of teaching my students about the errors, and dangers, of exaggeration. Perhaps, I should volunteer my services to the tea party people with respect to effective advocacy ;)

Long time no hear..I am having heaps of fun with Rossy over at IM on the same issue..
As a conservative myself (don't tell ok)I despair of these idiots that give conservatism a bad name