I was thinking of posting something of Dutch footballers (soccer players to the rest of us) while I was watching the 2010 World Cup final the other week. The commentators on the broadcast that I was watching mentioned a number of times that there were plenty of Dutch footballers with Indonesian blood pumping through their veins. In the final, the names of Robin van Persie, John Heitinga, and Giovanni van Bronckhorst were mentioned a number of times.

However, this post actually came to life as I was reading an article in The Jakarta Globe earlier tonight.

It was interesting to read that the Indonesian Football Association has a plan in place to recruit Dutch players with an Indonesian ancestry to play for the Indonesian National Team. At face value, sounds like a good plan, and why not? However, politics and bureaucracy means that this is nothing more than pie in the sky dreaming.

Indonesia's citizenship and naturalization laws and regulations are notoriously difficult to navigate. On paper, it can be argued that becoming an Indonesian citizen is easy. Nothing more than filling in the paperwork and going through the motions. Personal experience tells me that this is not the case.

However, this post is not about me, but about football players who may be tempted, or not, to change their stripes from the Oranje of Holland to the Red and White of Indonesia. One of the biggest obstacles to the idea of dual citizenship is that Indonesian politicians do not seem to be able to get their collective heads around the idea that someone can hold two passports yet be a devoted patriot to one. Sometimes, practical considerations, such as family or work, dictate  dual citizenship.

I am sure that there are some fringe players who cannot secure a regular gig in the Dutch national side that might be tempted by the prospect of playing consistent international football. However, the established stars like van Persie are not likely to be suiting up in the red and white of Indonesia.

Yet, if the Indonesians are serious about this then it requires that the government get on board and look at putting some flexibility into the current laws and regulations relating to holding more than one passport. Dual citizenship will go a long way to enticing those fringe players into considering a stint with the Indonesian national team. Otherwise, this is nothing more than a couple of old Indonesian men sitting round a table dreaming of world cup glory in 2110 when Indonesia hosts its first ever football world cup. 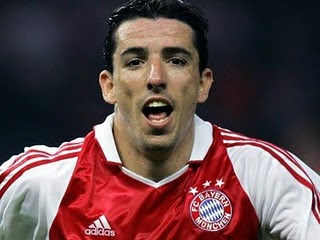 That is the Arsenal strip, but I am pretty sure that is not Robin van Persie. The body paint though seems to be the way of the future, something about aerodynamics and energy efficiency. Oh well and happy viewing! 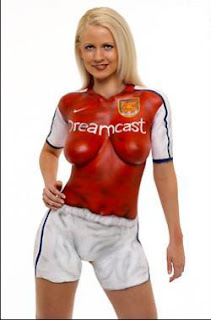