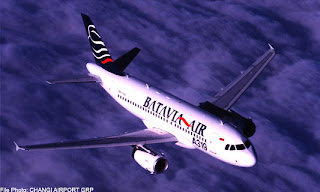 During one of my many forays into Indonesian news and views I came across a piece that reported that Batavia Air had secured the right from the European Commission to fly to the continent. Batavia Air is by most accounts still tinkering with the financial feasibility and financial viability of flying into Europe.

The airline is focusing its attentions on Rome and Amsterdam with a stopover in Jeddah. Amsterdam seems like a logical choice considering Indonesia's long history with its former colonial master, The Netherlands. Rome, though, is an interesting choice. Jeddah is the logical stopover point as Batavia Air is already flying to Jeddah. The European destinations will join Singapore, Kuching, Guangzhou and Jeddah on the international destinations list.

The words Batavia Air caused me to reminisce of a flight I once took with Batavia Air back in 2002. Admittedly, it was a domestic flight from Jakarta (Soekarno-Hatta) to Pangkal Pinang. It is a short flight of about an hour or so. An hour is usually just enough time to get airborne, for the crew to provide some snacks and collect the rubbish, and then land. The snacks on this particular flight are something that my wife and I remember even to this day.

Normally, passengers are given a little goodies box that usually contains a couple of Indonesian cakes and a pastry, and if your lucky even a small chocolate bar. However, on this flight it was a full roll of "Marie" biscuits and a glass of water! The glass of water was a nice afterthought considering if one was considering seriously chuffing down that whole role of Marie biscuits then they would almost certainly need to chug the glass of water to wash it all down.

So, hopefully, Batavia Air provides some better quality snacks on their much longer routes.
Posted by Rob Baiton at 17:48

I remember I once got "bakcang" on the flight to Palembang (From Jakarta). It was with Lion Air though and it was in early morning, so I suppose breakfast with bakcang is in order.

At least you got something. I recently had to pay extra 400 kr when I flew with Ryan Air (I know! I Know of their bad reputation, I had no choice, it was the only route that Ryan Air flew LOL) just to get my boarding pass printed

(since I couldn't print it directly from internet - guess what? Non EU / EEA passport)s

I have two passports. One of those allows me visa free travel in Europe (which reminds me I need to get onto getting one for my son :D)

Ryan Air...should not be all that long and you will be able to stand up the whole way ;)

It's not really problem with the visa, Rob - since I'm a holder of Danish residence permit, it means I could roam in Europe free and I never had problem with other airlines before

(There's never a border check in EU area but the one in UK anyway).

But this whole Ryan Air business is really pissing me off. No surprise, there though. It got me on my nerves on how they dared to charge extra fee just because I have non EU / EEA passport.

That was my first and last time flying with Ryan Air. No more! I'd rather take the train next time

How did I know that you were going to be a Danish Permit holder? ;)

I am a bit of a train person myself. I am hoping that in the not to distant future the Wife, the Kid, and I can do some train traveling around Europe.

Got to get a real job first and save some real cash...maybe a couple of years down the track lah!

If you are still in Dane-land we will look you up (if you do not mind being looked up, of course).

Well. It's nothing special, really

Since I live and have address in Denmark, I do have residence permit in Denmark. No surprise there. What's hard to get is the permanent residency.

I've written about it before here:
http://thisindonesian.wordpress.com/2010/06/23/so-do-you-think-you-can/

Sure, if you are around in the blue continent, drop me a message then :) I might not be in the Dane Land by then, but I'll still be around here somewhere (no matter how much I bitch about not having Indonesian food daily, I still love to live in Europe)

I should probably link your new blog to here.

I have been thinking of migrating to Wordpress myself. But, I am not tech savvy enough to work it all out. And, now that blogspot has whacked in a design facility it gives me something to do to alleviate the boredom :D

Ah, it just dawned on me that you might not recognise me as the old "the writer"? :)

My fault for not making a proper introduction :)

I will never look back on the blogspot land now that I'm in wordpress. Design is limited, but it's clean and easier to use :)

I did recognise you. I have just been over reading at the new place of residence.

If I am not mistaken, I think I received an email / blog notification / Facebook note or something about your move.

Hi Rob,
Batavia Air? hmmmm ....
Beside Garuda, I have only flew with Merpati, Mandala and Lion Air for domestic routes, they are quite okay.
So I can only hope that Batavia will work hard and smartly to build and maintain good quality services. Otherwise it will give a bad name for Indonesian airlines.

I thought Batavia was in essence a budget airline. So, this gives rise to the questions of "how much service are you expecting?" and "do you get what you pay for?"

A bad name for Indonesian airlines might already be out of Batavia's hands, don't ya think?