Each passing day further highlights the fact that the Indonesian Ulema Council (MUI) has way too much time on its hands. Unfortunately, rather than doing something useful like marshalling their considerable resources and self-confessed moral authority to rid Indonesia of poverty, they instead focus their considerable energies on really useful world-changing matters such as the prohibition of drinking kopi luwak. 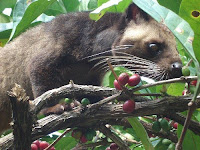 Kopi luwak is the world's most expensive coffee. What makes this coffee so unique, and apparently worth up to USD 600 a kilo is that the coffee beans are eaten by the civet and then passed through their intestinal tract and excreted in their feces. Then the feces are collected, the beans washed, and the coffee ground. All pretty simple really.

It is likely that there are many people who would turn up their nose at the prospect of paying top dollar for a recycled coffee bean, particularly so for a coffee bean recycled in this way. Yet, there are those who believe that kopi luwak is one of the world's great coffees, exquisite, and so worthy of the high price tag. Then there are others, probably not to be classed as connoisseurs of the little black beans, who think it to be just another cup of coffee, no better or no worse than you might get from a McDonalds McCafe. 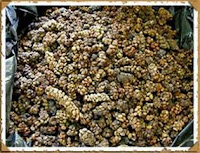 Funnily enough, the Indonesian president, Susilo Bambang Yudhoyono (SBY) decided that it was exquisite enough to give a bag to Kevin Rudd (former Australian Prime Minister) when Rudd visited Indonesia. That led to the inevitable, and somewhat lame jokes, of "crappacino" and "dung diplomacy".

However, when one thinks about it, it was pretty prophetic of the Indonesian president because it was not all that far into the future after that the then Australian PM found himself in a world of crap and was deposed as PM by his deputy.

The interest from the MUI (and according to the MUI, the NU) stems from concerns that kopi luwak is najis. Najis means ritually unclean, and unclean foods are forbidden in Islam. There is no doubting that najis exists in Islam and there are very specific provisions in place relating to things that are najis. It remains to be seen as to whether kopi luwak is one of those things.

However, no matter what the outcome, it remains a truism that there are so many far more important and pressing matters facing Indonesia and Indonesians that the MUI would be better served thinking about those and directing their collective energies to the successful resolution of those problems first before worrying about the najis or lack of najis-ness of kopi luwak.

Few Indonesian muslims could afford to drink kopi luwak. The obvious response to the insane proposal would be to drink Legendee coffee from Viet-Nam instead. It is made from enzymatically treated cofee beans, tastes very much the same as kopi luwak, and costs a fraction of the price. You can purchase it online at here.