Getting it Wrong -- Should the Police Apologise?

There is always two sides to any story. It would be interesting to see what the police's side of this story is because it must be good enough that it warranted the action that they took. Otherwise, there needs to be some disciplining taking place of the officers that allowed this case to go forward even after the mistake was identified and the realisation was made that this case would be dismissed. 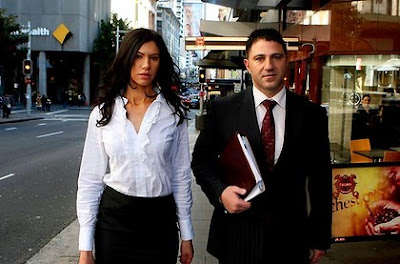 The case is a simple one of over-zealous police failing to rectify a mistake once that mistake was identified. Lisa Maree Boersma, a swimwear designer and part-time model took a holiday to the US.

While she was there she left her car in the care of her boyfriend who just happens to be a bodybuilder. On her return from the US she found the drug squad police surrounding her car, a black BMW.

It turns out the drug police had discovered five one-kilogram bags of white powder and a kilogram of hydrophosphorous acid. To the over-zealous drug police this was already an open and shut case of commercial quantities of methylamphetamine.

This leads to an immediate arrest and charges of being a supplier. If convicted Boersma was looking down the barrel of 25 years in the slammer, bye bye and we will see you in your 50s!

In any event, Ms. Boersma spent 3 days in custody until she could secure bail. The police fought bail. And, to ensure that they could get bail overturned the police decided that they would expedite the powder testing process. The police were obviously very keen to put this beautiful young drug supplier behind bars as quickly as possible and for as long as possible. Nevertheless, this is where this case should have unraveled and the police called it a day.

The testing of the powder revealed that it was caffeine dimethyl sulfone. It sounds much scarier than it really is, but in essence it is nothing more than an over-the-counter caffeine supplement that bodybuilders use. Unfortunately, this is not where this case ended because the police decided that even though the supplement was one that can be legally obtained (red. not against the law to have it), they still needed to pursue this case and refused to drop the charges.

Ultimately, Chief Magistrate, Graeme Henson, of the Downing Centre Local Court took this out of the hands of the police and dismissed the case.

Ms. Boersma is now free to get on with her life. Unfortunately, she does not get to do this with an apology from the NSW Police Force.

Maybe it is time to see, read, and hear the police's version of this case. It would need to be good!

Thus endeth the sermon.
Posted by Rob Baiton at 11:58

Hi Rob,
Police are the same every where, always looking for mistakes. For which purpose they'll use their power to detain their 'victim'
If their investigation show nothing wrong they tend to be unwilling to apologize.
Back to the topic, can the lady file complain and demand compensation?
(like Praperadilan here)

If the police had dropped the case at the point they knew that the white powder was nothing more than a legal supplement used by bodybuilders, then an apology would not be something I think is required.

However, they did not withdraw the charges and pushed this matter through to a court hearing, which was then dismissed. I was not at the hearing, but hopefully the magistrate gave the police a serve about their conduct.

No. I think that the police would argue that they have acted within their legal powers to conduct the search, make the arrest, and to pursue the case.

The search and arrest part is not the problem, the post powder test knowledge is. My guess is that they would still try and argue that there was some possibility that this was illegal activity because of the quantities involved and the potential for the materials to be used for nefarious purposes.