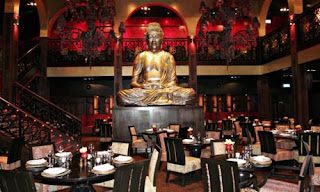 Some things come and go, and this is one of those; protests against the Buddha Bar in Jakarta. This really is making a mountain out of a molehill. The idea that it is in some way threatening interfaith relations and national unity do not bear out.

The only relationships that it seems to be threatening are those of the protesters who cannot seem to cope with the concept of a Buddha theme for a resto, cafe, and bar.

The current argument is that the name of the bar is an insult to Buddha and Buddhism. My guess is that Buddha would probably be telling the protesters to chill out and meditate a little, you know search for a little enlightenment, devote their human energies to something that is important and worthwhile.

The protesters have decided that if the governments of Jakarta and Indonesia are not going to revoke the business permits of the franchise holder, then the next best course of action is to congregate outside the French Embassy and demand that the French government do something about it because the trademark name is owned by a French company.

The biggest beef of the protesters is that using the name and image of the Buddha is an insult. This insult is further exacerbated by the fact that prostitutes hang out their. Now, for them to know that the bar is either frequented by prostitutes or overrun by them would require the protesters to have some intimate knowledge of the joint. Perhaps they are disgruntled customers?

One of the protesters even went so far as to suggest, "What's next? Christ Bar, Islam Bar, Hindu Bar?" Now, there is an idea. I would probably go for Jesus Bar myself. Let's face it, Jesus supposedly turned water into wine. Not just a little bit of wine but a lot of wine. So, the "Jesus Wine Bar" would seem to be aptly named. Now, for the Islam Bar. Why not? Not all bars have to serve alcohol. It could be a coffee bar. Maybe it could serve up coffees from places like Turkey and pastries from the Middle East. A Hindu Bar might need a little more thought...

There are so many important issues that need the dedicated attention of Indonesian citizens, this is not one of them.

Hi there, I think Buddhists (and, indeed, all of us) are entitled to their opinions, so they're fine. As long as the protests are done in non-violent ways.

Re: the name / Buddha Bar, I think it's about decency and tolerance.

If I think I've insulted others, I'd try to clarify that, and if indeed I was wrong & mistaken, I'll apologize.
But if I think I'm right, then I'll try to communicate & explain it to the other party.

It shows to others about our civility (errr, is there such word btw)

Personally, I think mocking others is not a nice thing to do. If Buddha Bar was created to mock the Buddhist, then they should fix that mistake.
If not, then they'd need to reach out and explain it to the Buddhists.

Nevertheless, here is my point. I am happy for whoever wants to protest to protest. I am all for protest as a legitimate form of action to make one's points of view known. Those that know me, know this :D

It is easy to insult others. Or, perhaps, others are easily insulted. Not that it really matters which way it works. If one makes a mistake and apologises then that is all well and good.

But, what we have here are two diametrically opposed view points. The Buddha Bar does not consider itself to be purposefully offensive and the protesters will not hear of anything but the name being a deliberate attempt to offend. So, where does one go from there?

I do not think that the owners are intentionally mocking Buddhism or Buddhists or even the Buddha himself. It is a marketing ploy to capture people's attention and interest in Eastern philosophies such as Buddhism.

Your Rp. 2 is always welcome around here!

I agree with you, hence my suggestion to reach out & communicate.

Your example is already pretty good in my opinion : "promoting Buddhism". Which can be either a very nice catchphrase; or a blunder - depending on the presentation really = Which means face-to-face discussions.

btw; thank God for Google Chrome's built-in spellchecker, phew. Sure saved me from some embarrassing typos :)

I reckon we are pretty much on the same page with this one, although perhaps at different paragraphs ;)

I read interesting commentary from both of you here. Indeed an interesting post to be discussed.

Unfortunately not all of us are well educated at the same level to understand and filtering the things with the same way as you are.

Harry has some real convincing arguments and thoughts on this one. It is too bad he does not drop by more and comment / challenge me more.

You should probably pick up the slack when Harry is busy ;)

I don't know that it is education per se, but perhaps it is just a matter of access to information.