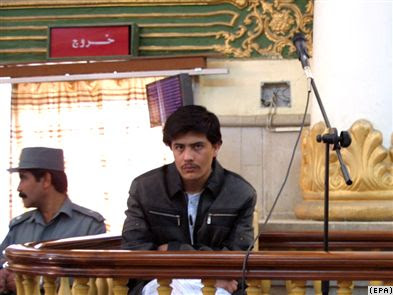 It is difficult to imagine what it must be like to work as a journalist in a country that does not respect the important role that journalists play in covering events and reporting them. It is even harder to fathom how downloading an article on women's rights can land one with a 20-year prison sentence for blasphemy. This is what happened in Afghanistan.

An Afghani journalist, Sayed Perwiz Kambakhsh, was imprisoned for 20 years for committing an act of blasphemy and has recently been released after Afghanistan's president, Hamid Karzai, signed the release papers, according to Reporters Sans Frontieres (Reporters Without Borders).

Kambakhsh, who reported for the New World (Jahan-e-Naw) newspaper, downloaded an article from a website based in Iran that discussed how the Al-Qur'an views women. This seemingly innocuous indiscretion resulted in a sentence of death being handed down by a court in Mazar-i-Sharif. This sentence was reduced on appeal to 20 years.

One hopes that this is a first step in a much more democratic and freer Afghanistan, and one that will see the release of other people imprisoned for similar offenses to this one. And, also one that will see Afghanis revisit the definition of blasphemy as it is in their constitution.

In many ways I have been fortunate to have been born and raised in a country where there is a rich tradition of freedom of thought, speech, and expression. I am sure that there are arguments to be made that these freedoms are not absolute in Australia. However, I am unlikely to go to prison for 20 years, let alone be sentenced to death, for downloading an article on women's rights. So, it would be a difficult task to convince me that I have not been fortunate.
Posted by Rob Baiton at 15:42